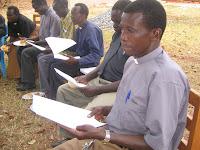 Today the clergy of the Diocese of northern Uganda assemble for their meeting at the Dicoesan headquarters. One unique thing is that some of them are dressed in new clerical shirts while others the opposite. Why this, one would wonder, the answer is found in the website here www.shirtsforgulu.org. On my on behlaf and on behalf of the clergy of the Diocese of Northern Uganda, I would like to acknoledge the recipt of the clerical shirt(s). This is a great contribution to us. We would like to thank all those who contributed generously towards the appeal by the Area Dean of Sonning the Reverand David Hodgson. At least 38 shirts are delivered and distributed to the diocesan clergy and about 30 clergy are still to receive this gift.
by Rev.Willy Akena

Posted by Willy Akena at 1:26 PM No comments:

Chapel Sermon by Archbishop Henry Orombi at the Primates Meeting, Friday
February 16 2007, the thirtieth anniversary of the martyrdom of Archbishop
Janani Luwum.

The Church of Uganda

The Church of Uganda was born in 1877 through CMS missionaries who were
invited by the King of Buganda. In 1885 Bishop James Hannington was murdered
as he came to Uganda through the eastern part of the country. He was
believed to be an enemy because he was approaching Uganda from the east. On
June 3rd 1886, the Martyrs of Uganda were killed because they refused
homosexual advances by the then King of Buganda. In 1962 Uganda became
independent. In 1971 Idi Amin took over from Dr Apolo Milton Obote, the
elected President of Uganda.

Janani Luwum spoke of when he surrendered his life to Christ:

"Today I have become a leader in Christ's army. I am prepared to die in the
army of Jesus. As Jesus shed his blood for his people, if it is God's will,
I do the same." Such were the words of a primary-school teacher in his own
village where he was well known and where his family and village had wanted
him to be a chief. "When I was converted, after realising that my sins were
forgiven and the implications of Jesus' death and resurrection, I was
overwhelmed by a sense of joy and peace. I suddenly found myself climbing a
tree to tell those in the school compound to repent and turn to Jesus
Christ. From time to time I spoke in tongues. I stayed up that tree for a
long time."

"Later on I discovered that some boys were converted due to my sermon I
preached up that tree. The reality of Jesus overwhelmed me - and it still
does. But I would be wrong to demand that those who are converted should
climb a tree and speak in tongues."

Eleven months after his conversion, on one Sunday afternoon, Janani Luwum
was moved to address an open-air meeting at All Saints Church in Kitgum, and
he said: "The Holy Spirit has been showing me how many educated men are
deserting the Church. When the Church dies out of existence they won't be
there to take the blame. I feel deeply convicted that it the church faces
extinction in this my native land, I will be around to die first before the
Church falls, collapses or dies. It will have to fall on me. I totally
surrender myself to the Church."

Then he fell on the ground and wept bitterly amid loud shouts of praise,
thanksgiving and tears of joy of repentance. Yusto Otunno responded by
saying that Luwum, as one of the educated brethren, should join the full
time ministry of the Church. God was calling him to sacrifice his teaching
career, and the real possibility of being a local chief, and to offer
himself for ordination.

Early in 1977, a small army rebellion was put down with only seven men dead.
However, Amin determined to stamp out all traces of dissent. His men killed
thousands, including the entire population of Milton Obote's home village.
On Sunday, 30 January, Bishop Festo Kivengere preached on "The Preciousness
of Life" to an audience including many high government officials. He
denounced the arbitrary bloodletting, and accused the government of abusing
the authority that God had entrusted to it. The government responded on the
following Saturday (5 February) by an early (1.30 am) raid on the home of
the Archbishop, Janani Luwum, ostensibly to search for hidden stores of
weapons. The Archbishop called on President Amin to deliver a note of
protest at the policies of arbitrary killings and the unexplained
disappearances of many persons. Amin accused the Archbishop of treason,
produced a document supposedly by former President Obote attesting his
guilt, and had the Archbishop and two Cabinet members (both committed
Christians) arrested and held for military trial. The three met briefly with
four other prisoners who were awaiting execution, and were permitted to pray
with them briefly. Then the three were placed in a Land Rover and not seen
alive again by their friends. The government story is that one of the
prisoners tried to seize control of the vehicle and that it was wrecked and
the passengers killed.

The story believed by the Archbishop's supporters is that he refused to sign
a confession, was beaten and otherwise abused, and finally shot. His body
was placed in a sealed coffin and sent to his native village for burial
there. However, the villagers opened the coffin and discovered the bullet
holes. In the capital city of Kampala a crowd of about 4500 gathered for a
memorial service beside the grave of the martyred Bishop Hannington. In
Nairobi, the capital of nearby Kenya, about 10,000 gathered for another
memorial service. Bishop Kivengere was informed that he was about to be
arrested, and he and his family fled to Kenya, as did the widow and orphans
of Archbishop Luwum.

The following, about 25,000 Ugandans came to the capital to celebrate the
centennial of the first preaching of the Gospel in their country, among the
participants were many who had abandoned Christianity, but who had returned
to their Faith as a result of seeing the courage of Archbishop Luwum and his
companions in the face of death.

Archbishop Janani Luwum, the third Archbishop of Uganda, Rwanda, Burundi,
and Boga-Zaire died a sacrificial death. His death brought revival to the
Church of Uganda and changed the political climate of Uganda. He was
declared the twenty-first saint in the Anglican Communion in 1998.