JAMES Obita, the former leader of the LRA delegation to the Juba peace talks, has applied for amnesty with the Uganda Amnesty Commission.

Obita, who was sacked as head of delegation by LRA leader Joseph Kony last month, confirmed that his amnesty application had been accepted.

“I have been told go to the Amnesty Commission and receive a certificate. I am so happy to be back home as a citizen,” he told The New Vision on phone yesterday.

His decision, he explained, was to demonstrate goodwill on the part of LRA members who were still in Garamba.
“This is not betrayal to the LRA. I still support the LRA and I will encourage them to sign the peace agreement and others to seek amnesty.”

The move, he hoped, would convince others who were still in the bush. “My decision will re-assure the LRA that amnesty is real and anyone can benefit,” Obita said.

“Some of the combatants had been misled to think that they will be arrested or tortured once they get amnesty. But when I informed them that I had been granted amnesty, there was a lot of hope and excitement.”

Obita, a businessman and lecturer in industrial chemistry, was optimistic that a final peace agreement would be signed by Kony.

“In my belief, the Juba peace process has ended successfully and it is just a matter of signing the agreement,” he stated.

“The issues that are still pending will be resolved once the LRA has understood some aspects of the agreement. That is why I decided that, after 22 years, I should come back home and stop fighting.”

For over 10 years, Obita has been working for the external wing of the LRA, based in Nairobi and London.
He was the LRA spokesman in the mid-nineties and later became the secretary for external affairs and mobilisation.

In 1998, he fell out with Kony, who accused him of trying to make money out of the LRA cause.

He was brought back in December 2006, when he was appointed technical adviser to the LRA peace team.

Obita replaced David Matsanga as head of the LRA delegation on April 10, the day Kony failed to show up to sign the comprehensive peace agreement. However, Matsanga was reappointed on June 6.

Meanwhile, a meeting of the LRA leadership, scheduled to take place yesterday and today, flopped because Kony’s demands for food, water and medicines had not been met, according to a letter from Matsanga to the chief mediator, South Sudan vice-president Riek Machar.

“The LRA high command directed me to point out to the world that without food supplies to the assembly area, the meeting in Ri-Kwangba on July 30 and 31 will not take place,” the letter, dated July 25, read.

Matsanga further called upon the international donors to continue funding the Juba secretariat, warning that failure to do so would jeopardise the peace process.

“The Juba peace process is under siege and there is a danger of it collapsing due to the lack of funding from the donor community,” he wrote.

He called upon the US and EU countries, especially Norway, Britain and Denmark, to review their policy on the Juba peace process.

The donors stopped funding the process following Kony’s refusal to sign the agreement. There was also growing concern about the lack of transparency in the spending of the Juba peace initiative funds, estimated at $15m.

Food supplies by Caritas were stopped recently after it became clear that the fighters were not assembling in Ri-Kwangba, as was required.

Instead, the food was collected and carried to Kony’s hide-out in eastern Congo, with some reports saying it was being sold.

Matsanga’s letter echoes an earlier appeal for more funds by the mediator, Riek Machar, which was sent to the UN Security Council through special envoy Joaquim Chissano.

In a 12-page letter, dated June 16, Machar pleaded with the international community to provide appropriate funding for him and his secretariat to “ensure a stronger and more effective response in implementation”.
Posted by Willy Akena at 4:36 PM 1 comment: Links to this post

Govt rules out compensation for the north

THE Government will not compensate the people in northern Uganda for property destroyed during the 22-year LRA war. The property includes houses and degraded land.

“It is sheer madness to think that we shall compensate people for such claims,” the disaster preparedness minister, Prof. Tarsis Kabwegyere, told Parliament on Thursday.

Okello Okello (UPC) had asked whether there were any plans to compensate those whose land had been degraded due to the establishment of internally displaced people’s camps and army detachments.

Kabwegyere was appearing before the committee on presidential affairs together with Prime Minister Prof. Apolo Nsibambi and other ministers in the premier’s office to defend their policy statement.

Kabwegyere argued that the displaced had to be resettled somewhere because “we could not have put them in the sky.”

But Okello Okello claimed that the army bombed areas to threaten the people out of their residences, forcing them to flee to the camps.

However, disaster preparedness state minister Musa Ecweru said the camps were built where the army could provide adequate security and the people went there voluntarily.

“We never woke up one day and decided to set up camps. I hate such lies and that is why I left the UPC.”
Okello Okello retorted: “The UPC never put people in camps. Camps are an innovation of the NRM. Now since you left, can you return our card?”

Information minister Kirunda Kivejinja said under the compensation law, one is paid the value of what they lost. He added that the burden of payment must be shared by the LRA rebels and the Government.

Kabwegyere said the camps and army units were set up in open spaces.
In a recent study on land in the north, 73% of 1,119 respondents backed compensation.
Posted by Willy Akena at 11:02 AM No comments: Links to this post

Another war in Northern Uganda 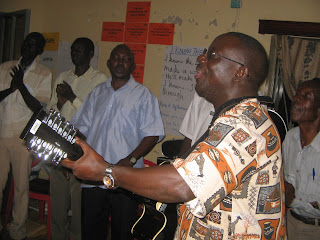 As the LRA war gains momentum to end, we are yet faced with another war and this time it is no longer using expensive weapons but the simple so called love or lust. Although recent figures indicates that in the northern region the HIV prevalence rate is 8.3 % while the county figures is at 6.4 % , HIV is posing serious threat to human life in Northern Uganda. Recently Northern Uganda Malaria AIDS and Tuberculosis (NUMAT) in partnership with World Vision organized a sensitization workshop for clergy of the Diocese of Northern Uganda. During the workshop participants were asked to change their attitudes towards HIV and AIDS and avoid stigmatizing those who are found to be HIV positive. For some years now the Abstinence, Be faithful and Condom (ABC) strategy have been applied with some commendable results. But the Church’s position is that Condom can not be advocated for, may be the church should rethink. Another strategy adapted is Safer practices, Access to treatment, Voluntary counseling and testing and Empowerment (SAVE). The biggest challenge in Northern Uganda is access to treatment, even those who are living with AIDS finds it extremely difficult to first of all afford the antiretroviral drugs. According to Dr. Alex Coutinho who was one of the facilitator, the key drivers of HIV epidemic in Uganda 2007 are:-

When it comes to prevention, the vulnerable are key BUT important groups to target include:
MEN – who control most prevention decisions, HIV+ - to practice POSITIVE PREVENTION, GLOBAL LEADERS – to keep investing in current and future prevention approaches.
PUBLIC – to keep advocating for more prevention investments.
The next step after this workshop is for World Vision to sign Memorandum of Understanding with the Diocese of Northern Uganda, thereafter work together in this struggle. Your contribution is most welcome.
Posted by Willy Akena at 10:16 AM No comments: Links to this post