Our 2014 Magazine is now available for viewing by clicking on the link below.  In it you can learn about the different programs and projects from last year and also see what is ahead for us in 2015. 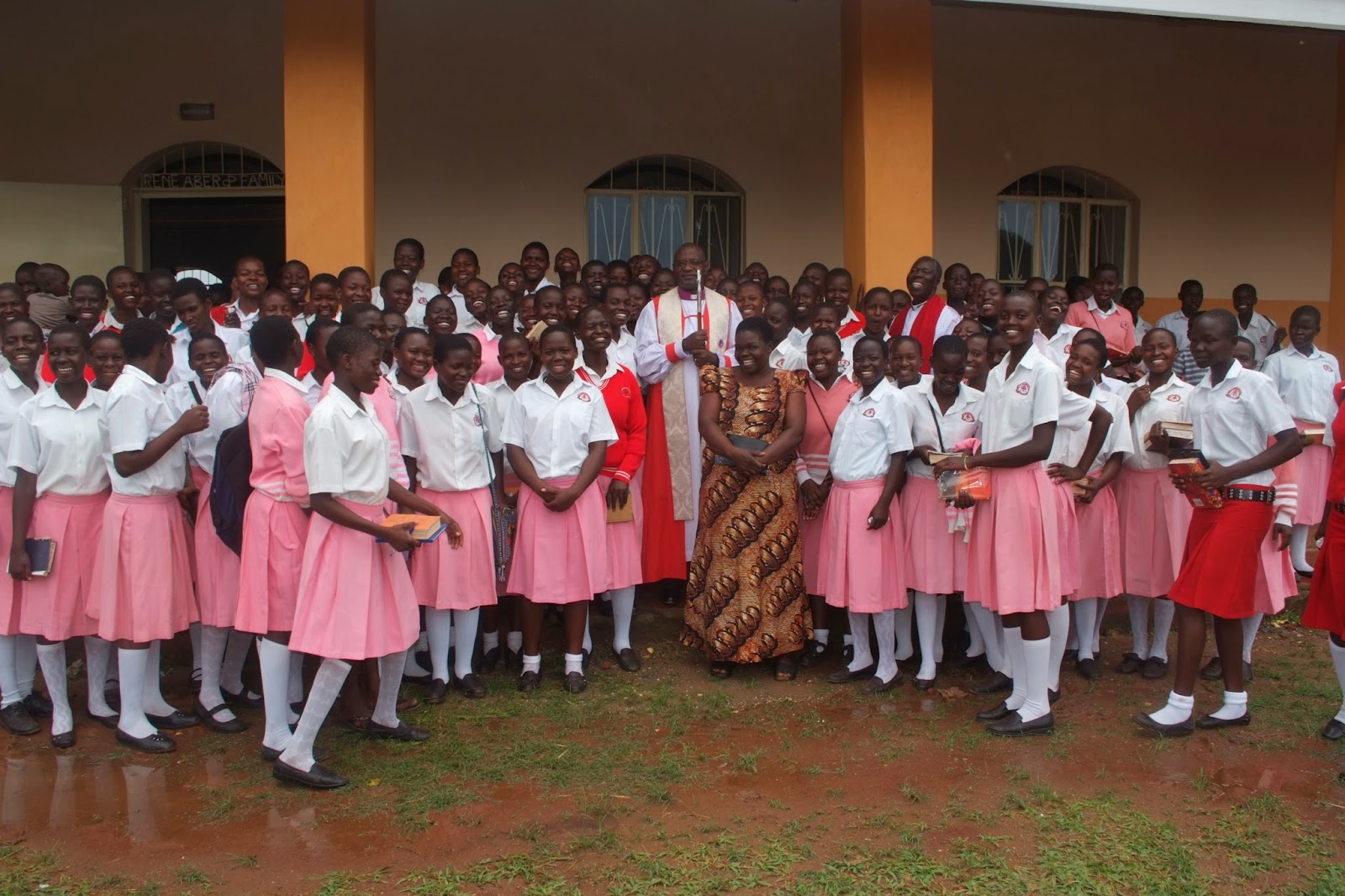 Posted by Willy Akena at 2:11 PM No comments:

16 February to be Public Holiday in Uganda 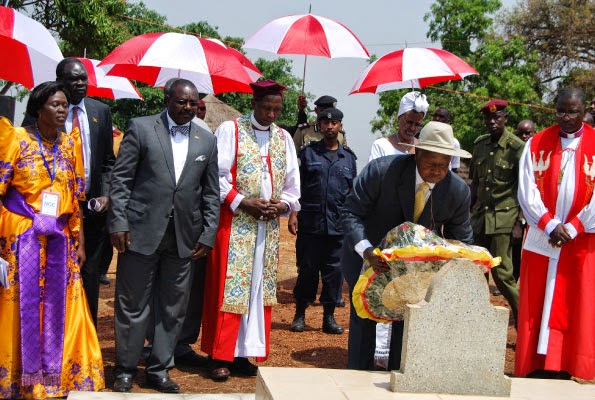 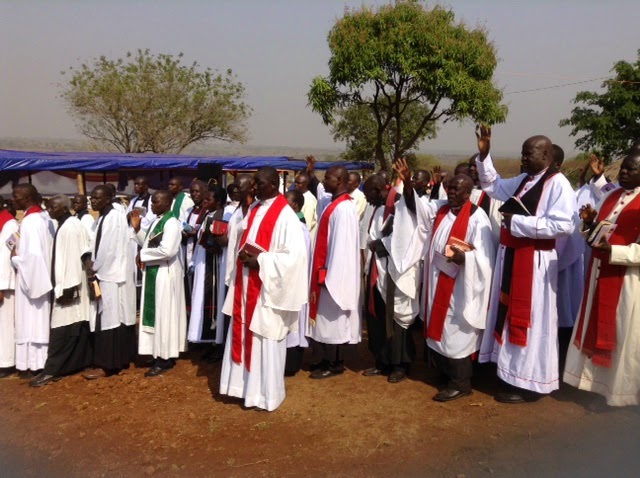 Day to become public holiday as statue is to be erected in Kampala in honour of the Archbishop. A museum will also be built in Mucwini, Kitgum District, in remembrance of 30 people killed by LRA rebels in 2002.
KITGUM- President Museveni yesterday declared February 16 a public holiday in honour of former Church of Uganda Archbishop who was killed during Amin’s reign on February 16, 1977.
The President also directed ministries of Education and Gender, Labour and Social development to erect a statue in Kampala in honour of Luwum. A museum will also be built in Mucwin, Kitgum in remembrance of 30 people killed by LRA rebels in 2002.
“Since we have Uganda Martyrs Day public holiday; February 16, the day Archbishop Janani Luwum was murdered, is going to be a public holiday so that people can get time to celebrate his life,” the President declared.
President Museveni said the killing of Luwum was a tragedy and shame to Uganda. Emotions ran high as close friends of Luwum narrated the ordeal the Archbishop endured before he was killed and how they were harassed before and after the clergy resolved to confront Amin to end killings. 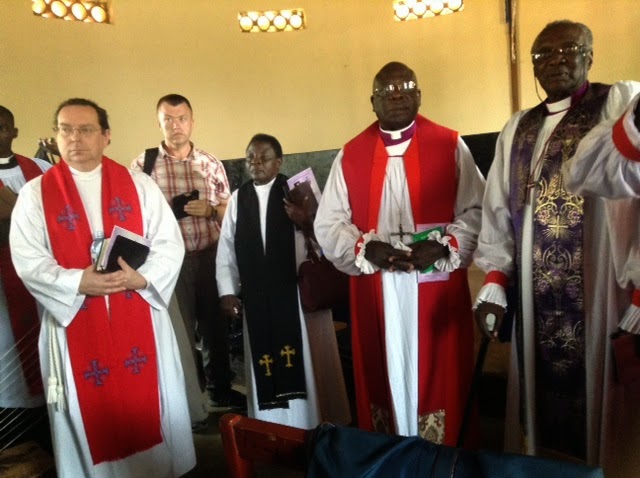 A total of 15 bishops wrote to president Amin condemning the extra judicial killings blamed on his regime, asking him to abide by God’s call for respect of human life.
Mr Apollo Lawoko, a former principal information officer at Uganda Television in 1977, said he was arrested and tortured at the notorious State Research Bureau in Nakasero together with Luwum.
Mr Lawoko, said he was in cell number one and the late Archbishop was in the cell opposite and he heard Luwum pleading with his torturers before hearing two gunshots that could have finished his life.“He kept telling them he was innocent as they tortured him...,” Lawoko said. 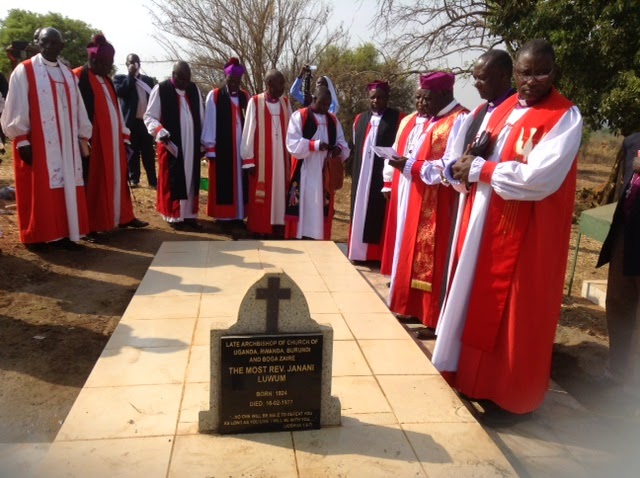 Mr Lawoko, who authored the book, The Dungeons of Nakasero, broke down in the middle of his speech as told thousands of Christians how he was beaten and became unconscious.
Ms Mary Luwum, the widow, narrated how she met Luwum in a church in Mucwini. “After meeting him, he asked me where I came from and I told him. But he followed me after church and told me he had fallen in love with me,” she said, causing laughter.
The main sermon was delivered by the Archbishop of York, England, John Sentamu, who said he ran to exile in 1970s following increased persecution of members of the Church of Uganda.
Memories of Archbishop Janan Luwum
“Today reminds me [of] the time he was enthroned. We were [in a] celebratory mood. It has been [a] difficult life but God has kept me going,” Mary Luwum, 92, Janani Luwum’s widow
“The death of Archbishop Luwum was a tragedy and a shame to Uganda...I was in Mozambique training young people...we didn’t give up...until we defeated Amin,” President Museveni
“There are 10 modern martyrs and among them is Janani Luwum. Seventeen years ago, I stood in front of his statue in London and inscriptions; Mercy, Truth, justice and peace were written on his statue. He never compromised on issues of justice and peace...,” John Sentamu, Archbishop of York, UK 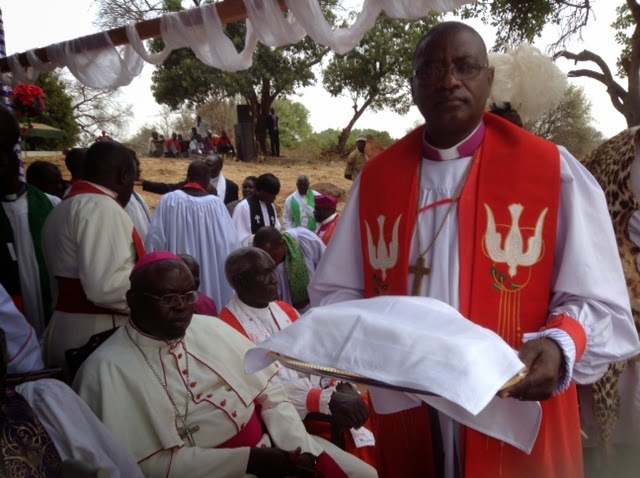 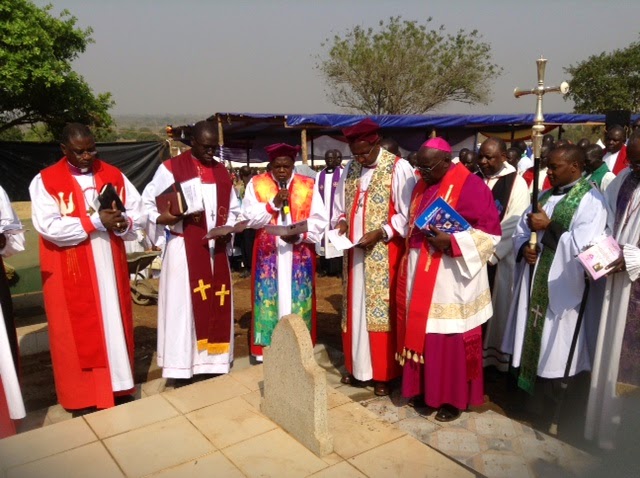 “Days before Luwum was killed, we went to Namirembe Cathedral to seek refugee because of the letter the bishops had written. But Amin followed us there,”
Retired Bishop Ben Ogwal Abwang, Luwum’s successor as northern Uganda Bishop 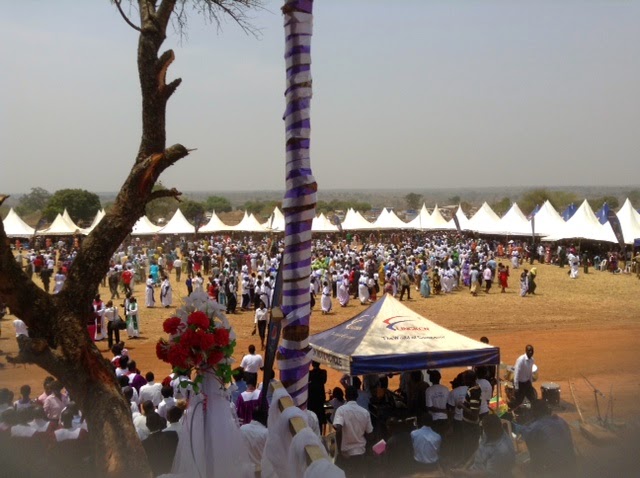 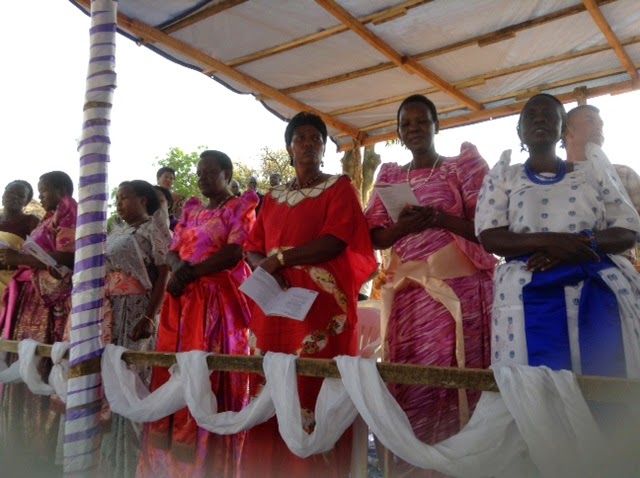 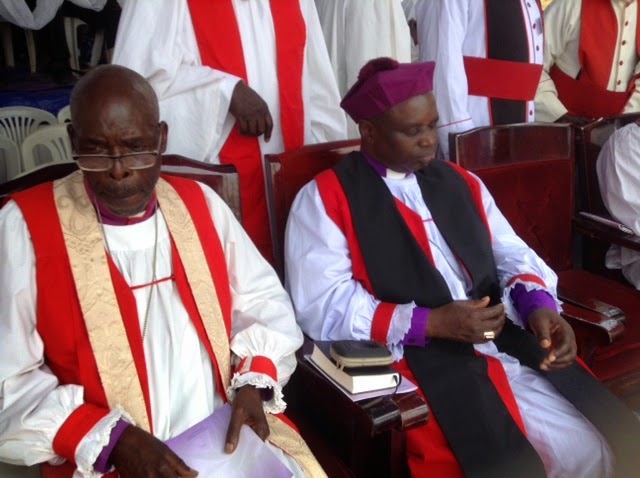 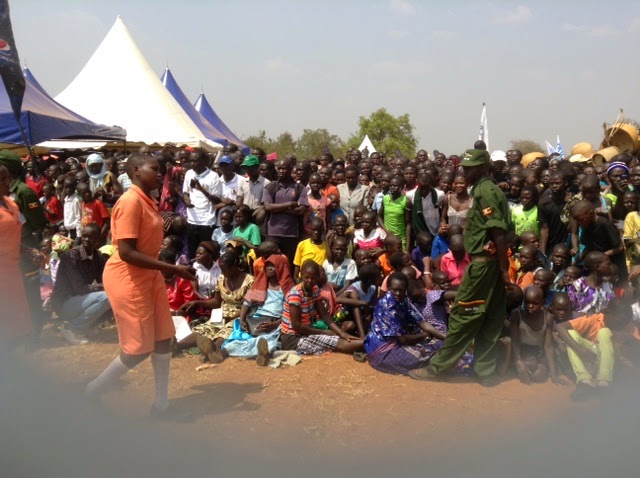 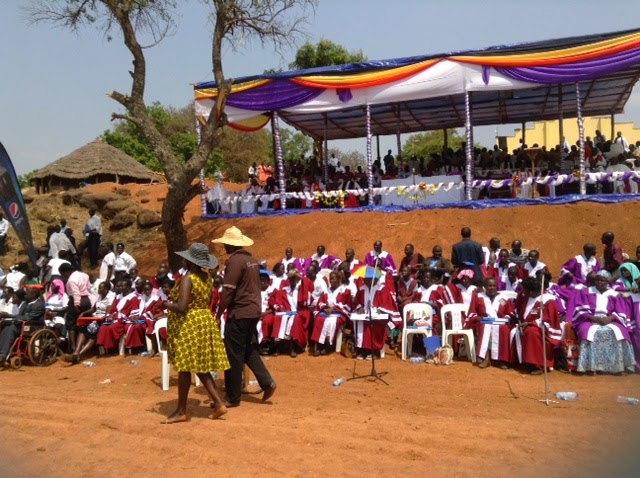 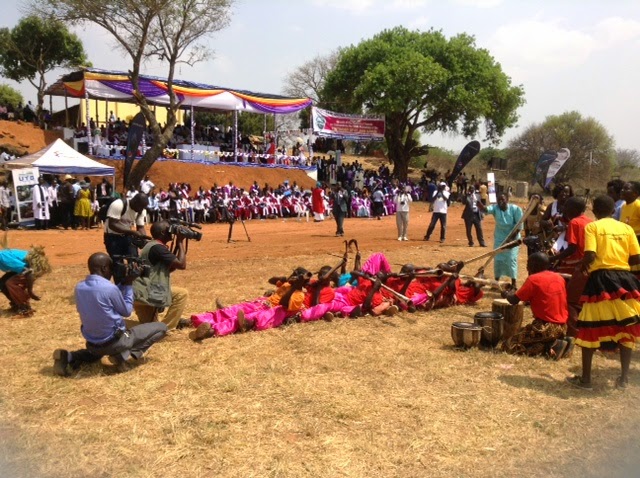 Posted by Willy Akena at 9:33 PM No comments: 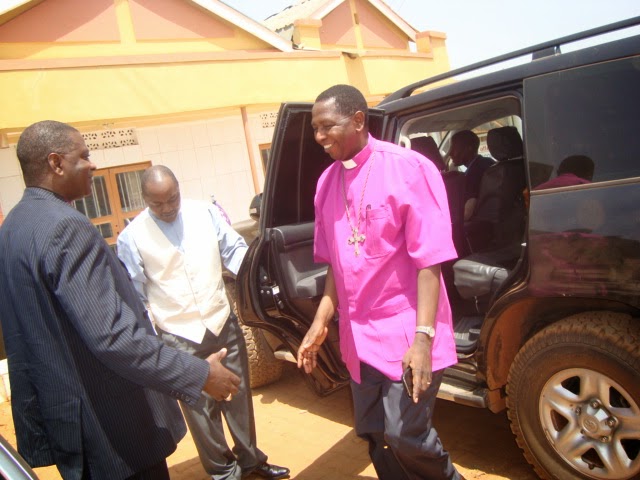 Just days to the historical memorial prayer at the site where St. Janani Luwum the former Archbishop of Uganda Rwanda, Burundi and Boga Zaire was laid to rest. The service is slated for 16th February 2015 at Mucwini the home village of St. Janani. The Current Archbishop of the Church of the Province of Uganda  his Grace Stanley Ntagali is already in Kitgum. He had a stopped over in our Diocese and had Lunch together with his team and a cross section of the Christians of the Diocese of Northern Uganda led by Bishop Johnson Gakumba. 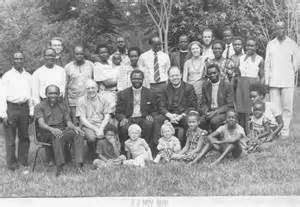 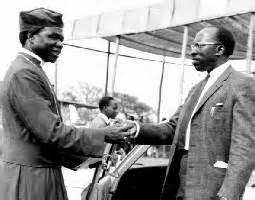 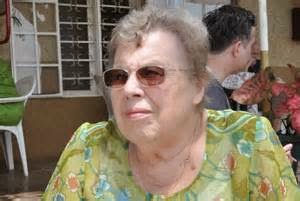 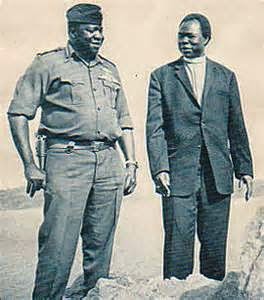 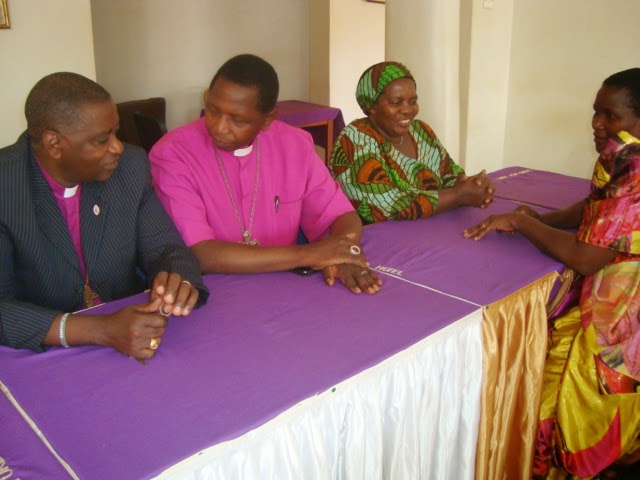 At Janani Luwum Theological College, the Principal Sandra has organized the students to attend the service. The college, situated in Gulu, is a brainchild of St. Janani Luwum.  St. Janani 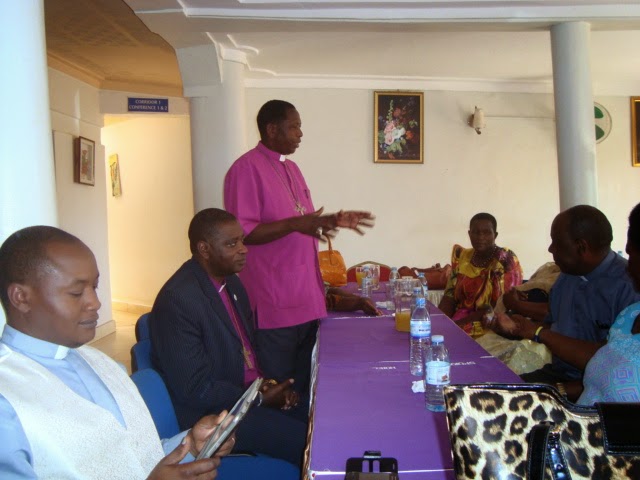 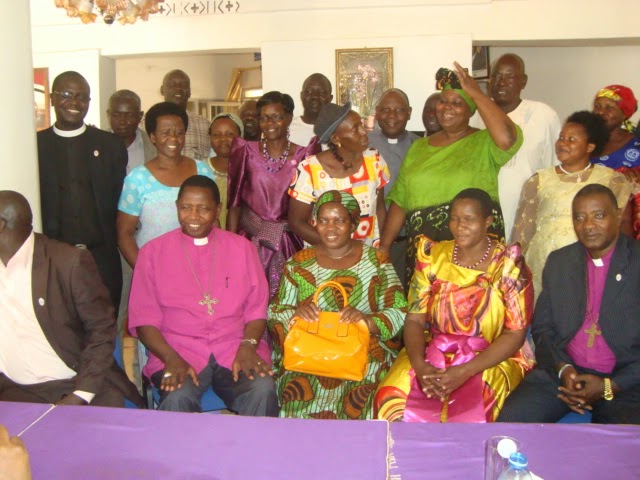 once said “the need to train manpower is so great…… we have many people who are baptized, confirmed but still remain babies” According to Him having trained manpower helps the Church to nurture men and women for ministry.

In the Diocese of Northern Uganda almost 90% of the clergy went through Archbishop Janani Luwum Theological College including the current Bishop of the Diocese of Northern Uganda Johnson Gakumba.
As we remember St. Janani let us continue to pray and support the Theological College here in Northern Uganda.
Janani Jakaliya Luwum (c. 1922 – 17 February 1977), was the Archbishop of the Church of Uganda from 1974 to 1977 and one of the most influential leaders of the modern church in Africa. He was murdered in 1977 by either Idi Amin personally or by Amin's henchmen. 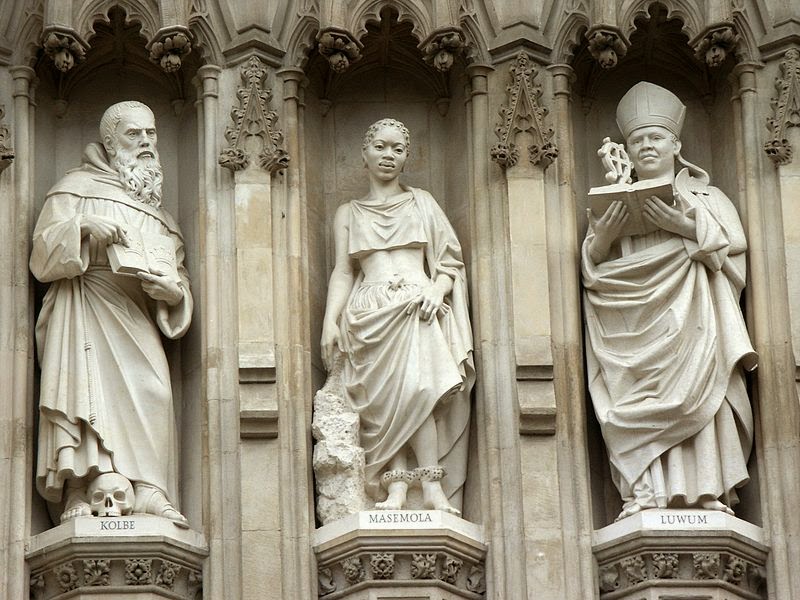 Luwum was born in the village of Mucwini in the Kitgum District to Acholi parents. He attended Gulu High School and Boroboro Teacher Training College, after which he taught at a primary school. Luwum converted to Christianity in 1948, and in 1949 he went to Buwalasi Theological College. In 1950 he was attached to St. Philip's Church in Gulu. He was ordained a deacon in 1953, and the following year he was ordained a priest. He served in the Upper Nile Diocese of Uganda and later in the Diocese of Mbale. In 1969 he was consecrated Bishop of the Diocese of Northern Uganda at Gulu. After five years he was appointed Archbishop of the Metropolitan Province of Uganda, Rwanda, Burundi, and Boga (in Zaire), becoming the second African to hold this position. On 16 February 1977, Luwum was arrested together with two cabinet ministers, Erinayo Wilson Oryema and Charles Oboth Ofumbi. The same day Idi Amin convened a rally in Kampala with the three accused present. A few other "suspects" were paraded forth to read out "confessions" implicating the three men. The archbishop was accused of being an agent of the exiled former president Milton Obote, and for planning to stage a coup. The next day, Radio Uganda announced that the three had been killed when the car transporting them to an interrogation center had collided with another vehicle. The accident, Radio Uganda reported, had occurred when the victims had tried to overpower the driver in an attempt to escape. When Luwum's body was released to his relatives, it was riddled with bullets. Henry Kyemba, minister of health in Amin's government, later wrote in his book A State of Blood, that "The bodies were bullet-riddled. The archbishop had been shot through the mouth and at least three bullets in the chest. The ministers had been shot in a similar way but one only in the chest and not through the mouth. Oryema had a bullet wound through the leg."
According to the later testimony of witnesses, the victims had been taken to an army barracks, where they were bullied, beaten and finally shot. Time magazine said "Some reports even had it that Amin himself had pulled the trigger, but Amin angrily denied the charge, and there were no first-hand witnesses".
Janani Luwum was survived by a widow, Mary Lawinyo Luwum and nine children. He was buried at his home village of Mucwini in the Kitgum District. He is recognised as a martyr by the Church of England and the Anglican Communion and his death is commemorated on 17 February as a Lesser Festival. His statue is among the Twentieth Century Martyrs on the front of Westminster Abbey in London.