The war between the rebels of Joseph Kony and the President of Uganda Yoweri Kaguta Museveni ended about 5 years ago. What was destroyed during the 20 years war cannot be rebuilt within a short time. 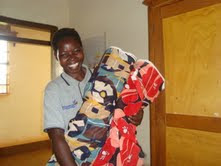 Catherine Holding new materials sent by Marie from Japan Women here have suffered most and the impact is still being felt and will continue to be so, unless a systematic positive plan is put in place to address this. We sincerely thank Marie Cosgrove for all the support she has so far given to the Diocese of Northern Uganda, it all start small but expanding in a mighty way. Marie with support from her friends in Japan is sending used clothes for children and some adults. Recently we received a very good JUKI sewing machine which is now assembled and has become one of the best machines we have at the Women Development Centre. In addition to the above Marie is able to give us some very good materials which we are using to make eco bags. Some of the materials can be used to make very good dresses. One of the best gifts that Marie is helping to give us is sending Joyce Ajok and Catherine Tusingwire to study in Japan and there after come back to train more girls at the Women Development Centre. 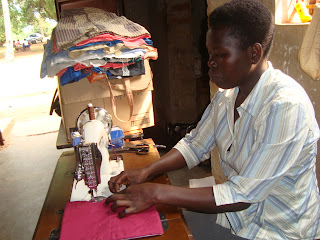 Ajok Joyce Using the JUKI machine from Japan Women Development Centre currently has 46 girls studying tailoring, 26 for hairdressing and 2 for designing. The centre has many challenges as the girls who come to the centre are from very poor background. Most of them dropped out of school after only 4-7 years. Reasons for the drop are: - School fees, cultural only boys are given priority where money is not adequate and some girls said they could not continue because of getting very low marks in class. With support from Danish Uganda Friendship Association (DUFA) more than 200 girls have graduated from the women Development centre and have formed Alumni groups in the different centre across the Diocese of Northern Uganda. At least 110 of the former student have been given sewing machines with support from DUFA. Some of the former students have become role model in their communities. Pray with us so that Marie get money to help Joyce and Catherine travel to Japan.
Posted by Willy Akena at 11:08 PM No comments: