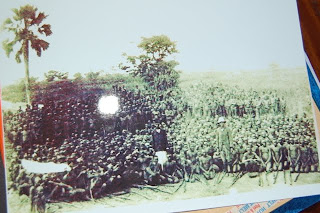 The Diocese of Northern Uganda established in 1961 will celebrate her 50 years of existence; the celebration is combined with 107th anniversary of CMS missionary to Acholi land. This year big events will be held on the actual spot where the first missionaries planted the Cross (Musalaba). On 26th November 1904 the CMS mission station was established at Keyo and Bishop Alfred Tucker, Dr. and Mrs. Albert Cook, and Rev. AB Loyd were the key players. Later Rev. AE Pleydell and Rev AD. Kitching joined Loyd at Keyo. Keyo was selected by the missionaries because of its central locationl; the place is a few miles away from Sir Samuel Baker’s Fort of Patiko. The Shrine is almost completed. The Diocese is also celebrating 50 years of her existence since 1961 when the Diocese of the Upper Nile was subdivided into the Diocese of Mbale, Soroti and Northern Uganda.
In 2004 the Diocese celebrated her Centenary and Archbishop Henry Luke Orombi had this to Say” The celebration is also un usual and unique as it is taking place in Gulu where the armed rebellion by the Lord’s Resistance Army(LRA) has a devastating impact on the people of Acholi. The Situation is of ruins and desolation. It is painful and indeed it is un usual for the suffering people to Celebrate”
This year 2011 the story is different almost 99% of the people who had been in the camps have returned to their original villages and very busy rebuilding their lives. The area is very peaceful and free movement of people, animals as well as vehicles is visible even at night.
It is also a wonderful coincidence that the 7th Bishop of the Diocese has both his names having 7 letters each and is overseeing the 107 years of Christianity Celebration in Acholi land. See the miracle JOHNSON (7) GAKUMBA (7), SEVENTH BISHOP, 107TH YEARS. According to the Jew the letter 7 is a complete number.
The key activities will include: -
• Mass wedding, already over 45 couples have registered.
• Ordination of Deacons and Priests.
• Four deacons will be priested and these are: -Rev. Kevin Olweny currently a Chaplain at Awere Secondary School and Unyama National Teachers College, Rev. Zachariah Otto, a Chaplain of Keyo Secondary School, Rev. James Olara Chaplain at Koch Goma Secondary School, and Rev. Samuel Kibwota, chaplain at Gulu Core Primary Teachers’ College.
• Those to be ordained deacons are Merilyn Wilson ( Lay Curate at Holy trinity Church Brompton London UK) and Nyeko Robert Luku( currently caretaker Agung Parish)
• A one week medical camp is also being organized, and Dr. Margaret Okello a consultant at Mulago Hospital, one of the first Acholi girls from keyo to have gone to the University is spearheading this.
• A one week door to door mission has been planned.
• Finally the official opening of the Shrine that has been built on the sport where the missionaries first preached the Gospel to the Acholi People.
Invitation has been extended to the President of Uganda His Excellency Yoweri Kaguta Museveni. All the Dioceses that were curved out of Northern Uganda like: - Diocese of Lango, Madi West Nile, Nebbi and Kitgum have also been invited to come for this celebration.
The Cultural and Political Leaders like the Kabaka of Buganda and Rwodi of Acholi had a zeal for what would bring change in the life of their people. Hence, they invited the Missionaries. We now have the challenge of keeping the fire of the Gospel burning even brighter.
The theme of the celebration is:”Arise and shine again”
You are all welcome to join us in the celebrations.
Posted by Willy Akena at 9:05 PM No comments: Links to this post

Set to be the United Nation Secretary General 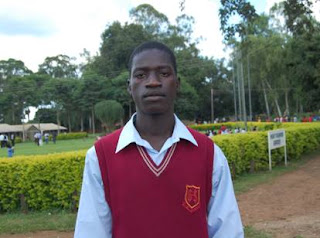 A Letter from Ocen Walter
I am very happy to communicate to you and I hope you are doing well still. I am Ocan Walter,one of the beneficiary of the Bristol Scholarship, I am from Odyak Village, Gulu District. I love my studies so much but I am facing difficulties in payment of fees because our fees is shillings 276,000 and you help is 170,000 Uganda shillings which is very good but I now face problem in clearing the remaining 106,000 balance because my parents now have nowhere to cultivate due to land disputes.
My good sponsor, I remain still a committed students, I attained 15 aggregates in our mock and was the best student, I do hope to get 8 for 8 aggregates in final exams. Hoping to join King’s College Budo because I would like to get government scholarship in A’ Level so I am herby begging with great hope that could you please meet the high fees of Budo King’s College for two years and enable me to get to University. My response towards your scholarship remain positive because my vision/dream is to become the future United Nation Secretary General so that many poor fellows in the World would get international Scholarship to study through me. I am determined to become! Yes I will through you taking me to Budo.
Finally my sponsor could you please help us by paying us in full so that we remain committed in our studies.
Posted by Willy Akena at 8:03 PM No comments: Links to this post