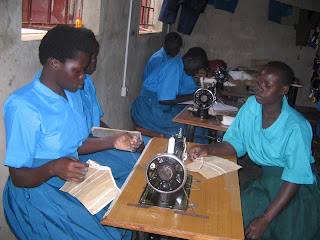 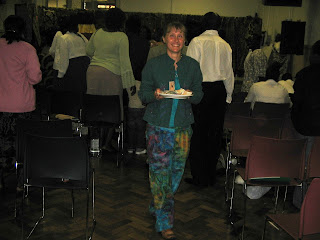 Photo by Rev.Willy Akena in Oxford

Thalia Carr the wife to Martin Carr of Oxford stood forward and spoke in a mixture of English and Lwo saying ‘Ci wan ma watye kanyi pe watwero jogo cente mo me wilo caran” meaning are we too poor to raise money for sewing machines. Provoked by the Thalia's appeal and family contribution of money that can buy one sewing machine,the Acholi community in London and Oxford who were attending a fellowship meeting in Oxford being chaired by Bishop Nelson Onono-Onweng raised 188 Pounds. The money was handed over to Brenda Onono to bring to the Women Development Centre for buying sewing machine for the girls who were abducted by the Lord’s Resistance Army and are now being trained at the Diocesan training centre. After their training the girls often come out without a sewing machine to start a leaving. Giving a sewing machine to one of these girls would make them able to support themselves. Currently we have 30 girls at the centre and the money raised can buy three sewing machines. Are you willing to support one? Let us know.
Posted by Willy Akena at 6:03 PM No comments: Links to this post 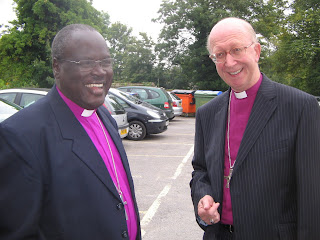 Today Bishop Nelson met the Bishop of Oxford Rt.Rev. John Pritchard at the Diocesan Office. The Dicocesan Communication officer interviewed Bishop Nelson about his work in Northern Uganda and the prospect for peace in this war ravaged part of the world.

Earlier on Bishop Nelson held a meeting with Church Mission Society(CMS) Regional Co-ordinator Mr.Tim Sanders at their New Office complex in Oxford. The two discussed a number of issues including;-communication, training and peace in the region. On Sunday Bishop Nelson will speak at St.Margaret Church in Oxford.
The Diocesan liaison officer in the UK Mr.Martin Carr is making all these work in a miraculous way and we thank God for his sacrifice.

Rev.Willy Akena in Oxford
Posted by Willy Akena at 5:10 PM No comments: Links to this post 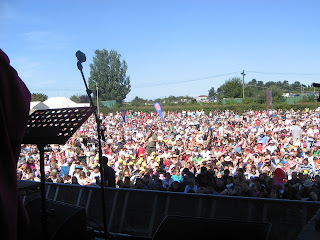 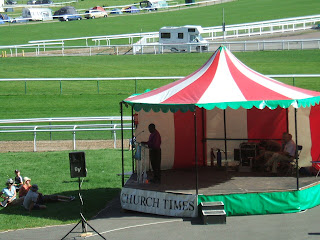 The Bishop of Northern Uganda, the Rt. Rev Nelson Onono-Onweng, drew a large crowd and great respect for his activities as a founding chairman of the Acholi Religious Leaders Peace Initiative, meeting the rebels, including Kony, by night out in the bush. As a mark of solidarity with the thousands of children who flee to the cities for safety each night, he spent four nights sleeping unprotected on the open tarmac. The action resulted in the building of shelters for them.
Bishop looked to women to make a difference, citing the women of Japan after Hiroshima. I am now looking at women as the agents of peace. Those fighting are children born of a woman, so the women can talk to them.
On arms, he protested: “In Uganda, we don’t make arms, but small arms are everywhere. Where are they coming from? Why should they be there for us to kill ourselves?”
This was during the Greenbelt festival that attracted about twenty thousand people from across the world. This year theme is Heaven in the Ordinary.
During the week, Rev. Willy Akena accompanied by Revd Canon Stuart Taylor met with the Archbishop of Canterbury International Secretary David Peck at the Lambeth Palace, where they discussed support to the Diocese of Northern Uganda and the peace process.
Bishop Nelson who is currently in the UK for a three weeks official visit together with his wife Brenda and Rev.Willy Akena will this Sunday 2nd September speak at St. Andrew’s Church Cobham, St. Peter Henleaze and St. Philip and St. James in Bath. Thereafter the entourage will leave for Oxford where among others the Bishop will meet Acholi Community in the Diaspora, Church Mission Society, and Mothers Union.
As appeared in the Church Times, London 31st August 2007, additional reporting by Rev.Willy Akena in UK
Posted by Willy Akena at 6:14 PM 1 comment: Links to this post