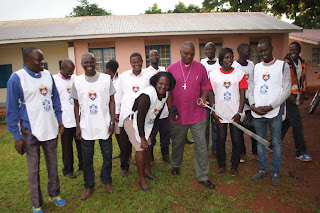 Over 600 households received relief items from the Church of Uganda, Diocese of Northern Uganda on Monday 4th September 2017.  The items included saucepans, Jerrycans, Sandals, blankets, plates, cups, assorted clothes as well as mosquito nets. While delivering the items to the Refugees in Pagirinya Camps, the Bishop of the Diocese of Northern Uganda Johnson Gakumba said they have been able to acquire those items from friends and well wishes of the Diocese of Northern Uganda. He prayed for Peace to return to Sudan so that these people are able to go back to their country of origin and engage in productive life. The Bishop who led a team of his staff actively participated in the distribution. 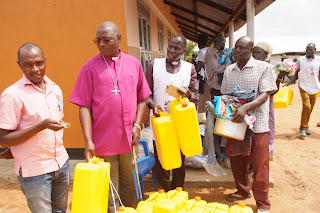 Pagirinya camp is one of the many refugee camps in Uganda and located in Adjumani District boarding Amuru. It is about 80 kilometers North West of Gulu town.


The need in Pagirinya camp is huge and concerted effort of the different stakeholders is urgently required.


We also met a number of young people who are struggling to study and they lack fees to stay in school. We were also told that the schools in the camps are charging 5,000 shillings for pupils as fees per term, and those who are not able to raise the money are not allowed to study. One girl called Kevin now in Primary Six told us that they sometimes sell the relief items inorder to get money to pay for their fees.


Most of the elderly are equally suffering with no one to take care of their welfare. Some of them rely on left over of food grains that fall from the sacks during distribution. 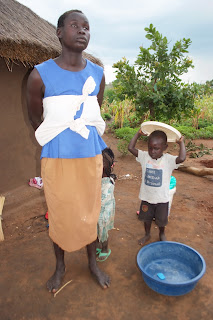 Early this year a team from the Diocese of Northern Uganda visited Adjumani and Pagirinya camp where it carried out a rapid needs assessment. After the visit, the Bishop wrote to the office of the Prime Minister (OPM) requesting to partner with OPM, department of refugees to offer Humanitarian assistance to refuges in Adjumani, Gulu and Lamwo Districts in Northern Uganda. The OPM responded positively in a letter dated April 12, 2017 and since that time the Diocese of Northern Uganda has been on the ground providing as well as mobilizing requisite resources for humanitarian interventions. We also provided some items to the floods victims at Elegu boarder and Apar land conflict victims just a few weeks ago. We therefore appeal to well-wishers to support the Diocese in ministering to the refugees. Remember this is part of our assignment given by Jesus Christ himself Mathew 25:36 ff “Naked and you clothed me; I was sick, and you visited me, I was in prison….” 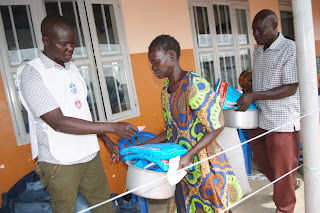 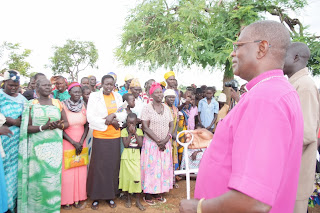 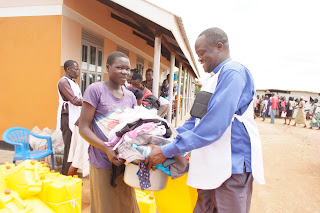 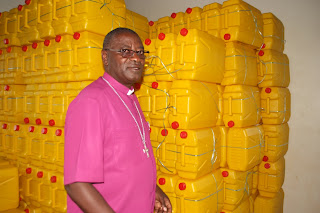 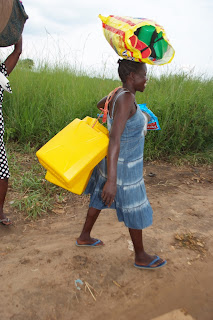 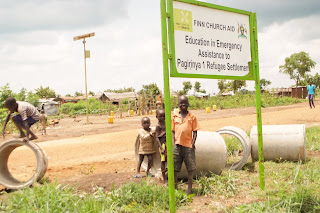 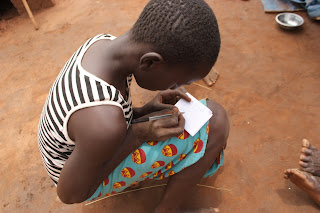 Posted by Willy Akena at 12:28 PM 9 comments: Links to this post 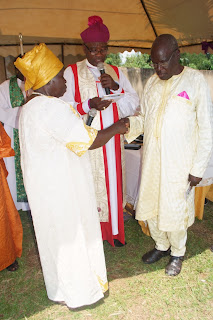 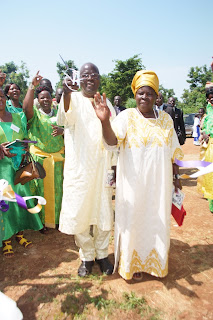 Bishop Nelson Onono-Onweng and Mama Brenda celebrated their 50 years of marriage. The ceremony took place at their residence in Layibi Division Gulu Municipality, and was officiated by the Bishop of the Diocese of Northern Uganda, Gakumba Johnson and the preacher was Bishop Alfred Acur of West Lango Diocese. Bishop Alfred thanked God for taking good care of bother Nelson and Brenda. He urged other couples to learn from the experiences of Nelson and Brenda. Bishop Johnson thanked the couple for living exemplary life as husband and wife. Brenda said the key to peaceful and stable family is trust in God, and humility. 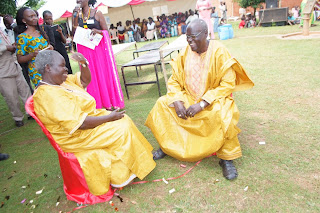 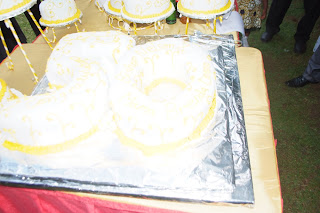 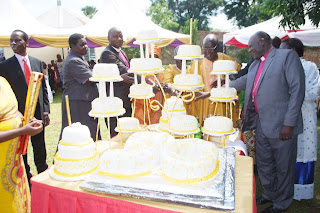 Posted by Willy Akena at 5:03 PM 55 comments: Links to this post

12 men and 1 woman were ordained priests by Bishop Johnson Gakumba on Sunday 25th June 2017 at St. Philips Cathedral. The Bishop of Busoga Diocese, The Rt. Rev. Paul Moses Naimanhye was the Guest preacher, he appealed to the newly ordained priests to remain faithful in the ministry. Hon. Betty Aol Ocan thanked the church of Uganda for opening up the ordained ministry for women and challenged the women to take up this opportunity to serve God whole heartedly.

Posted by Willy Akena at 5:14 PM 84 comments: Links to this post 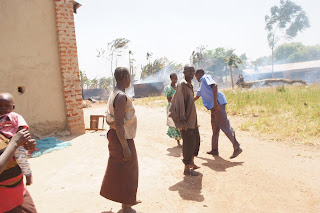 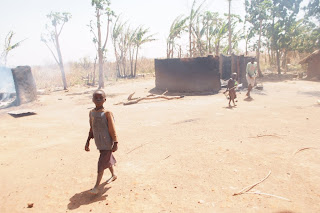 The Parish Priest of Nwoya Parish, Rev. Nyeko Simon Peter, Tuesday 17th Jan 2017 lost items worth millions of shillings. Rev. Nyeko told us that the fire was started by an old woman. Among the items lost in the inferno were:  2 ½ Bags of Beans, about 400 kilograms of onions, all his documents, Vestments (7 clerical shirts, 3 cassocks, 1 surplice, 6 trousers, 4 stoles) 1 cupboard, Iron box, 3 New Bibles, 4 Big saucepans, 2 bicycles, 2 wheelbarrows, 4 Office chairs, 2 tables, 4 plastic chairs, 5 Jericans, 2 Basins and many other small items. The wife who was away had no time to pick any of her items and those of her 9 children.
A total of 10 huts got burnt, 5 belonging to the Reverend’s family, one hut of an old woman and 4 built by parents for the teachers of Nwoya Primary School. 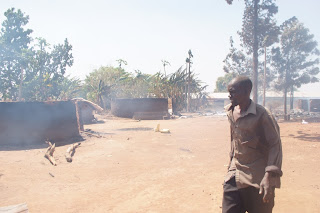 The Diocesan Secretary Rev. Lumumba Patrick who visited the scene was shocked by what he saw.  Rev.Lumumba appealed to the Christians to support the Reverend to recover from the incident.  He was pleased with the women who turned up to see what had happened and said “even during the time of Jesus women were with him during difficult moments”. Rev. Lumumba took 25 kilograms of Phosho and some kilograms of beans and used clothes as emergency contribution from the Diocese.
Bishop Johnson said “It is high time the Christians start building decent houses for the pastors instead of grass thatched”
Nwoya is one of the many parishes in the Diocese of Northern Uganda where the clergy residences are still grass thatched. By the time of compiling this report the Reverend Nyeko and his family were still camped in the Church building. Rev. Neyko Simon Peter can be reached on his mobile number 0787 713 673 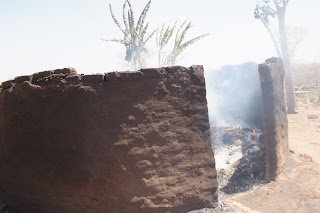 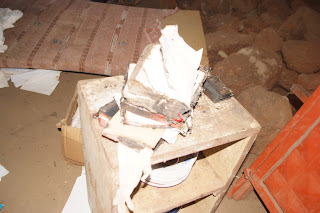 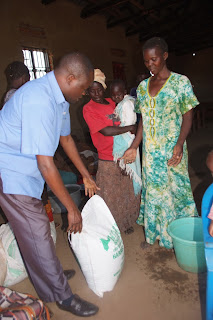 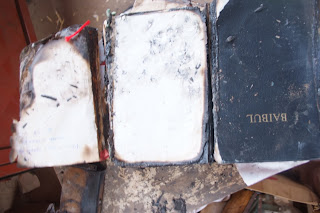 Posted by Willy Akena at 4:35 PM 6 comments: Links to this post


It is dry season in Northern Uganda, rain is expected in March. After moving to 18 parishes in our Diocese in four days, I observed the following key things: -
Ø  Uncontrolled fire is razing in many places day and night.


Ø  Many huts have been burnt.
Ø  People have lost food staff and other household items to the fire.
Ø  Those who have got good harvest are selling food items like the world is ending today.
Ø  The road to Amuru district Headquarter is the worst.
Out of the original 24 parishes we have 7 parishes having decent accommodation for their priests (St. Philips Cathedral, Christ Church, St. Michael Obiya, St.  Andrew Anaka, Cwero, Agung and Koro). The rest are living in grass thatched huts (OT LUM).
In Koch Goma we visited a ruined of the late wod Aceng who was burnt together with his wife and three children in a grass thatched hut. This is a sad reminder of the Kony era, where torching of huts was the order of the day.
We thank God that through Bishop Johnson in the last seven years  all the parish headquarters have got permanent church building except only two  parishes of Ongako and Lakwana.
Please pray for the families of the clergy in our diocese that they be transformed from living in grass thatched huts (which is highly ignitable) to Iron roofed houses.
Posted by Willy Akena at 11:43 AM 68 comments: Links to this post