A chronology of events 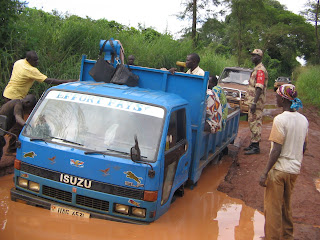 Picture by Rev.Willy Akena inside Southern Sudan.
The road to peace is not smooth, Its full of pot holes like the one in the picture:Some people had to travel on this Diana Truck to meet Kony in the Jungle as a confidence building measure in July 2006,including of course Rev.Willy Akena


Today marks one year since the Uganda Government and the Lord's Resistance Army (LRA) peace talks started in Juba. Henry Mukasa compiled the chronology of the talks aimed at ending the 20-year conflict that has ravaged northern Uganda.

July 2006
July 14: Peace talks between Uganda Government and the LRA opened by South Sudan President Gen. Salva Kiir in Juba. “I know there is a lot of bitterness. My appeal to you is to come to table with open minds. Let the world see you and hear you do the right thing,” Kiir urged.

July 15: The Government team disputed LRA accusations of persecuting people in northern Uganda, cattle rustling and insecurity. The head of the Uganda delegation Dr.. Ruhkana Rugunda described the accusations as “undue, unwarranted and unfair.” “The LRA tried to cleanse itself of the atrocities committed over the years. The Government doesn’t want to open old wounds but give a soft landing to the LRA,” he said.

July 16: The Government called on the LRA to ceasefire, abandon the rebellion and accept the amnesty.

July 19: LRA demand for an immediate ceasefire is rejected.

July 20: The chief mediator, Dr.. Riek Machar met LRA delegates in a closed meeting together with Acholi leaders led by Rwot Achana to discuss the suffering of the people of northern Uganda.

July 21: LRA and the Government delegations traded accusations of committing atrocities. The Government team pointed out that the LRA team comprised persons who chopped and cooked people during the Patong massacre. The LRA delegation shot back claiming that the Government team had a colonel who abducted a detainee from a prison in Gulu, shot him and chopped off his head.

July 22: LRA demanded for federalism and self-determination for the North and East and also wanted the constitution amended to provide for federal states.

July 24: Peace talks adjourned for 10 days to allow each delegation to consult their leaders.

July 31: In a press conference at Ri-kwangba, LRA leader Joseph Kony denied having links with FDC President Col. Kizza Besigye and contriving plans to overthrow the Uganda Government by force.

The Government chief negotiator, Dr. Ruhakana Rugunda and the president of South Sudan, Gen. Salva Kiir, announce the start of peace talks at a press conference in Juba on July 3, 2006

August
August 1: Kony reiterated his will to end the war through the Juba talks at a meeting of political, religious and civic leaders from the war-affected areas, held in Garamba forest.

August 3: Machar called upon the Government and the LRA to declare a ceasefire before talks resumed. Uganda defence officials replied that there was no fire to cease since the rebels had fled the country and were almost defeated.

August 9: The LRA walked out of the talks protesting the Government's refusal to declare cessation of hostilities.

August 11: LRA returned to the talks. Both delegations presented position papers on disarmament, demobilisation and reintegration separately. The Government team demanded LRA fighters assemble in designate area for a ceasefire to be granted.

August 17: The LRA's demand for South Africa to co-mediate the talks is rejected.

August 24: LRA demanded cabinet posts and 30% representation on commissions, statutory bodies and presidential appointments as a condition for ending the war.

August 26: The Uganda Government and LRA signed the Cessation of Hostilities Agreement (CHA). The rebels are given one month to assemble at Owiny-ki-Bul and Ri-kwangba. A monitoring team with representatives from SPLA, UPDF and LRA is suggested. Delegates break for consultations. Museveni ordered cessation of hostilities and named Col. Tumusiime Nyakaitana and Maj. Charles Okiror as UPDF representatives to the monitoring team. Kiir names Maj. Gen. Wilson Deng as the chairman of the team.

September
September 4: Delegates re-assembled in Juba for the third round of talks.

September 6: LRA revealed their reluctance to assemble at Owiny-ki-bul and Ri-Kwangba as demanded by the CHA. The rebels said the two areas were not acceptable. Otti said LRA fighters would not assemble until the International Criminal Court drops arrest warrants against four top rebel commanders for war crimes and crimes against humanity.

September 7: Talks resumed and parties reviewed the performance of the CHA. The rebels dismissed the

september 12 deadline to assemble, which was drawing close.

September 26: LRA suspended participation in the peace talks protesting alleged deployment of the UPDF in South Sudan and DRC.

September 28: Kiir met the Government and LRA teams to get the talks back on track.

September 29: LRA accepted to return to the table after Machar that SPLA ensure that security in Owiny-ki-Bul.

October
October 8: A report of the Cessation of Hostilities Monitoring Team accused both the LRA and the Government of violating the agreement. The report was made after a visit to the two assembling points for LRA fighters in southern Sudan.

October 21: President Museveni arrived in Juba for talks with Kiir. He also addressed LRA delegates but they, led by deputy head of delegation, Josephine Apira, rejected his handshake.


November
November 1: Government and the LRA signed an addendum to CHA which gave the rebels one month to re-assemble and restricted unauthorised visitors to assembly areas.

November 3: LRA asked for a break to allow its team tours the northern Uganda for “consultations and confidence building.” The Government rejected the demand as untimely describing it as a vain attempt to conduct a referendum.

November 5: The Government team was incensed by LRA's procrastination. LRA's absence at meetings prompted the Government delegation spokesman, Capt. Paddy Ankunda to comment, “We are not happy with the way the LRA is treating us. They seem to be buying time for reasons that are suspect. Their behaviour seems to confirm our fears that they are using peace talks to re-organise.”

November 18: LRA deputy leader, Vincent Otti told The New Vision in an interview in Garamba that he regretted the incident in which the LRA delegates in Juba shunned Museveni's handshake. “Diplomatically, I would have shaken his hand. A handshake does nothing. What they did was not good. They should have greeted him,” he said. On his part Kony said Museveni is a good man for facilitating his wives and relatives to travel to Garamba and meet him. Two lawyers Nobert Mao and Owiny Dollo explained to the indicted LRA commanders the provisions of the ICC Rome statute. LRA resolved to send representatives to Uganda to meet Museveni as part of confidence-building.


December
December 14: Delegates reconvened. The Government delegation was upbeat but the LRA insisted it would not talk until the UPDF pulls out of southern Sudan.

December 16: Another supplement to the CHA was signed extending the cessation of hostilities agreement by two months, up to the end of February 2007.

December 20: LRA was put under pressure to sign a deal on comprehensive solutions as a Christmas gift for northern Uganda. LRA maintained its demand for a minister for the North in the office of the president.

January 2007
January 8: Southern Sudan's President Omar el-Bashir threatened to use force to chase the LRA out of south Sudan in the wake of ambushes staged by the rebels along main roads linking Uganda to Juba.

February
February 4: “If Kenya can't host the talks we can go to another country. We are not going back to Juba. That is finished,” Otti insisted.

February 26: The CHA deadline to assemble in gazetted areas expired without LRA honouring it.

March
March 4: LRA delegates failed to show up at the Acholi peace conference held in Juba to revive the peace talks.

March 11: Rugunda met LRA commanders Kony and Otti in the first-ever direct talks between the rebels and the Government. Organised by former Mozambican President Joaquim Chissano, the meeting aimed at reviving the stalled Juba talks.

March 16: The LRA delegation promised to return to the talks on condition that the South Sudan government guarantees their security.

March 26 Talks failed a day after restarting in Juba as the LRA accused the UPDF of attacking their positions.

April
April 16: After meeting Chissano in the remote, secluded and forested village of Ri-Kwangba, the LRA rebels agreed to resume talks in Juba on April 26.

April 26: Talks resumed. Chissano warned the LRA that time was running out for them to reach an agreement with the Government.

April 28: Chissano spent hours shuttling between the LRA and Government camps to resuscitate the peace talks. The LRA team wrote a protest letter to the mediator, Machar, accusing the UPDF of attacking their positions in southern Sudan.

June 2007
June 5: The chief mediator, Machar, officially communicated the route LRA fighters still east of the Nile must use to assemble at Rikwangba.

June 13: The Government and LRA signed an agreement, the principles of accountability, stipulating the framework through which perpetrators of crimes during war will account and reconcile with the victims. They agreed that both protagonists “have cause to account and to accept to submit to the processes and procedures of accountability.”

June 29: The agreement on reconciliation was signed. It provides for alternative traditional justice that could insulate four LRA commanders against the International Criminal Court prosecution. It binds the Government to strike the LRA off the terrorist list as soon as the rebels renounce rebellion, sign a ceasefire pact and submit its members to the process DDR.
Posted by Willy Akena at 5:07 PM

The DNU is sponsoring vulnerable children and some young adults who have become child mothers to aquire skills that can empower them to be self supporting. The Archbishop Janani Luwum Vocational Institute is offering range of course .

For about 150 US Dollars you can support one student at the Vocational Institute for one term.