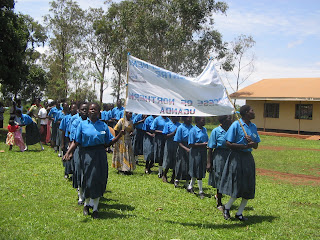 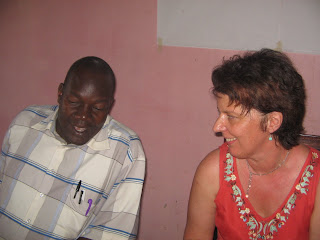 Ululations filled the air in the Diocesan Headquarters as 73 graduants from Women Development Centre complete a one year course in tailoring. While officiating the function the visiting Danish national Ms Elsebeth Højgaard applauded the girls for enduring. “I want to thank you for the warm welcome, wonderful performance and for making it to your graduation”. Elsebeth said.
Two heads are better than one: The Municipal Education Officer Mr. Omona Darlington Akongo (L) exchange ideas with Elsebeth Højgaard during the graduation ceremony.Elsebeth congratulated the girls for their determination despite the many challenges that they faced before and during their training. She said in her country- Denmark people are not suffering like those in Northern Uganda because of a very strong social system in place. Elsebeth was blissful to note that although people here are suffering the spirit of togetherness is very strong unlike in her country where so many people are lonely. Elsebeth concluded by urging the girls to make proper use of the friends that they developed while at school and be creative in order to have a future.
Representing the Municipal Education Officer was Mr. Darlington who challenged the Mothers’ Union to explore more opportunities for the girls instead of the traditional tailoring course being offered. Darlington said “I appeal to the Mothers’ Union to look beyond the Tailoring training being offered” “Time has come for us to diversify the training obtainable to include: - Computer skills, Human Rights, Peace Education, and Business skills among others.
One of the Girls who graduated could not hide her joy, she said “Today I have started the road to self reliance I can now see a future for my children”
The four best students were given sewing machines for kick starting their professional life.
The girls were issued certificate.

Posted by Willy Akena at 5:13 PM No comments:

As we move towards the end of the peace talk, the road needs patience, let us learn from the two big wings in the picture, Dr. Ruhakana Rugunda(L) and Riek Machar(R). 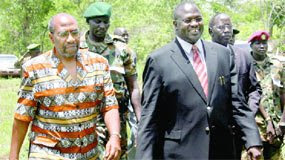 By Milton Olupot
in Ri-Kwangba, Sudan

Kony wants more explanation on mato-oput (Acholi traditional justice) and the operation of the special division of the High Court that is to prosecute rebel fighters, chief mediator Dr. Riek Machar told journalists at the Congo-Sudan border town of Ri-Kwangba, the venue for the signing.

“It looks like we are not going to have a signature today,” Machar announced late in the afternoon as dignitaries waited in the bush for Kony’s arrival.

Speaking through his main man Nyekorach Matsanga, Kony said he could sign the document today or tomorrow once he is clear on the two issues. Kony, who was said to be in the vicinity, had travelled from the Central African Republic where he recently relocated.

Machar immediately dispatched Acholi traditional and religious leaders along with Matsanga to meet Kony in the Ri-Kwangba bushes and brief him.

The two sides have already agreed that “minor crimes” committed by rebels during the war be tried under mato-oput and “serious crimes” by the special High Court division.

“If Kony requires an explanation, that’s absolutely legitimate. We are happy he is willing to continue dialogue and seek clarification because it’s a matter that deals with his fate,” said the chief government negotiator, Dr. Ruhakana Rugunda.

No one should be blamed for Kony’s delay to sign the peace agreement, he noted, because both sides had played their part.

“It’s our target to get total peace. The peace process is advancing.”
Rugunda’s deputy at the talks, international relations minister Okello Oryem said by braving the forested region from the CAR, Kony had demonstrated his commitment to peace.

A white tent with plastic chairs and tables will serve as the venue for signing ceremony when, or if, Kony shows up today.

When Machar announced Kony’s decision, a huge dull cloud hung over the remote Ri-Kwangba village where security was tight.

Kony, Okot Odhiambo and Domonic Ogwen are indicted at the International Criminal Court (ICC) for war crimes and crimes against humanity. Signing the peace agreement could save them from the trial.

The Government promised to ask the ICC to drop the case and allow mat oput and the local courts try the rebels. But, the ICC insists the warrants are valid.
Posted by Willy Akena at 1:14 PM 2 comments: 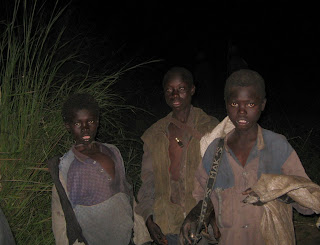 Children beleived to be with Kony up to now. FIle Photo


ACHOLI leaders have asked LRA leader Joseph Kony not make it a habit to continue giving excuses to postpone the signing of the final peace agreement.

“We have to exercise patience but Kony should also stop postponing the signing,” Gulu LC5 chairman Norbert Mao said on Wednesday.

“Many of us were disappointed with the abrupt message of extension up to April 14 because this is the second time they are delaying the process.”

Since Kony was the one who requested for the peace talks, Mao added, he must demonstrate that he was serious by personally signing the final peace agreement.

The chief LRA negotiator in the Juba talks, David Matsanga, on Tuesday said Kony would not be able to make it from Garamba forests to Ri-Kwangba, where he was due to sign on April 3. He suggested April 10 as the day Kony could sign.

“We agreed to keep our fingers crossed and avoid speculation about the failure by Kony to sign the final peace agreement on April 3 as planned,” noted Kenneth Oketta, the prime minister of Ker Kwaro Acholi.

“And this should not create a lot of anxiety among the people. Let’s avoid speculation which may derail the whole peace process and wait until it has been confirmed that Kony will not sign because so far, five agreements have been signed and this is the only one left,” he added.

Samuel Oduny, an elder in Gulu, observed that Kony was unpredictable, adding that it was not the first time he was “playing games.”

“Right from 1994 to date, Kony has not shown seriousness in peace talks. I have no hope for these talks. If he signs, well and good but I doubt,” he stated.

But the Gulu resident district commissioner, Col. Walter Ochora, explained that he got communication from the Central African Republic (where Kony is reportedly living) that the rebel leader was moving towards Ri-Kwangba, to append his signature on the peace agreement.

According to the RDC, the only rebel commander who had reached Ri-Kwangba was Abudema, adding that there had been poor coordination between Kony and members of the peace team on the date of signing.

Kony, Ochora advised, should have told Matsanga the exact date when he would be ready to sign “other than keeping people on their toes.”

But the district youth chairman, Christopher Omara, appealed to Kony to release all the children, expectant and breast-feeding mothers to show his committment to the realisation of peace.
By Chris Ochowum
Posted by Willy Akena at 10:49 AM No comments: