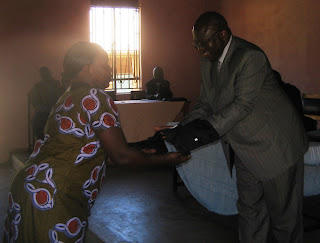 Henry Kasule, Bishop Nelson Onono-Onweng and Rev. Joyce Lakot, members of the Bible Society and Clergy of the Diocese of Northern Uganda pose for a general photo after receiving the clerical shirts

As preparation for the visit of the Archbishop of the Church of Uganda gains momentum, the clergy of the Diocese of northern Uganda got a morale lifting when a delegation from the Bible Society of Uganda donated Clerical Shirt to all of them; both retired and in active service.
The General Secretary Bible Society of Uganda Mr. Henry Kalule who led the team said “We as members of the Bible Society decided to offer the little we could to support our brothers and sisters in this diocese”
The clergy appreciated the gift and pledge their commitment in spreading the good news of our Lord and Saviour Jesus Christ. They thanked Bible Society for demonstrating practically the Good Samaritan today. They also said the clerical shirts would make them appear very smart in front of the Archbishop who is scheduled to visit from November 24-30, 2008
Posted by Willy Akena at 8:35 AM 1 comment: 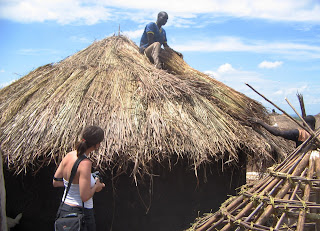 Following the relative peace that has been enjoyed by the people in northern Uganda for the last two years, a good number are returning to their original homes. According to a survey carried out by the District recently over 80% have returned to their home in Gulu District. It has also been found out that those who are not able to support themselves are still in the camps the category includes; orphans, widows, disable as well as old people.
In another related development, some of those who were in the Lord's Resistance Army are finding life difficult, some of them cannot go back home for fear that the community may not accept them. Part of the reason for this negative feeling is based on some accusation of being involved in abduction in own village during the war. One of those I spoke to told me “our land has been taken away by some people I fear to argue with them"

Reports from Kitgum say, District authorities last week launched the phase-out of the internally displaced people’s (IDP) camps. This was to facilitate people’s return to their original homes. Speaking at the launch at Labongo Amida IDP camp in Chua County, the deputy resident district commissioner, Sylvester Opira, said the phase-out followed assessment and recommendations by the district disaster management committee. “In Amida camp, over 80% of the population has already left the camps near their home villages. The remaining 20% comprises the elderly, disabled and children,” Opira said
Posted by Willy Akena at 5:44 PM No comments: