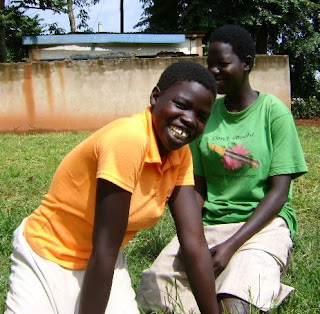 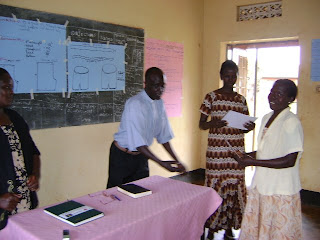 The Diocesan Secretary Rev.Canon Ayela Okot Othniel Labeja shortly after handing over a certificate of attendance to Ajok Joyce (R), Irene Ayo is looking at the certificate and the Chairperson Women Development Centre Mrs. Jennifer Buruto (L)
End of May updates from the Women Development Centre 2009
As part of capacity building at the Women Development Centre (WDC), a four days training on professionalism was conducted at the Diocesan headquarters. The training attracted all the tutors of the WDC. The facilitators Irene Can and Ojok Anthony came from St. Monica Centre in Gulu. The following key areas were covered: - Teacher’s Professional Code of Conduct and Criteria, Scheme of Work, Lesson plan and Assessment
While closing the training, the Diocesan Secretary Rev. Canon Ayela called upon the teachers to exhibit the highest level of professionalism in order to have a positive impact on the learners. “Teachers who practice what they teach gain respect from the students” The Rev Canon said. He cited an example of a teacher who used to command lots of respect, lost it miserably after his trouser felt off in front of the pupils due to drankardness. The affected teacher requested for transfer immediately, because of the embarrassment he was having.

There is plan to organize another training for the tutors in other areas. In another related development, second term opens Monday 25, May 2009 with low turn up in most school in the district. At the WDC, by Friday 30, May 2009 only 30 students had reported. When asked why some of the students have not yet come, one of the student, Apiyo Sunday said, “The current rain is affecting the turn up, with some student very busy in their gardens, preparing fields, planting, while others weeding”. Another student said the low turn up is due to inability to raise some of the requirement for personal effect.

Information reaching us is that Akello Vicky is not able to report early because she is nursing her child who got burnt during the holidays. The Head girl, Grace Anek lost a relative and still with the bereaved family. We still expect more students to report.
Posted by Willy Akena at 11:13 AM No comments: Links to this post