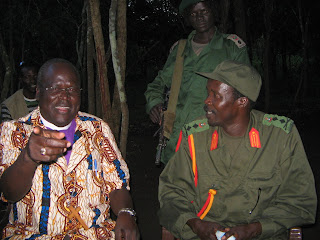 Bishop Nelson probably points towards home, Kony is expected to come out after the signing of the final agreement. File photo taken by Rev.Willy Akena


Leaders from northern Uganda are due to travel to Juba for the signing of the final peace agreement between the Lords Resistance Army and the Government.

However the signing slated for Friday has been thrown in doubt with the LRA insisting they will not sign the agreement unless indictments against its leader Joseph Kony and his commanders are dropped.

The International Criminal Court issued the warrants in 2005 against the top 5 LRA commanders for crimes against humanity in one of Africa's longest conflicts.
Posted by Willy Akena at 4:11 PM 1 comment: 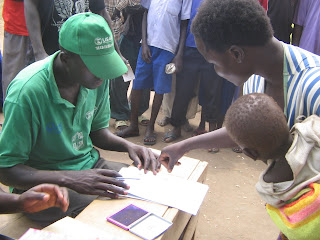 Coupled with so many other factors, the war in the Northern region of Uganda has led to much destruction in the lives of the natives.
In my sojourns in the camps in northern Uganda as opposed to other parts of the country, the vast majority of people cannot read or write. Even children of school going age cannot speak English, leave alone read simple sentences. Even children in high schools are almost illiterate, except for the boasting that they are in High school!!!
This poses a great concern for the future of the Acoli. What will happen when tomorrow when the educated are no more? How can the Acoli compete squarely in the job market when more that 75% of them are not getting proper education? Has UPE really met its goals in the last 10 years? How about USE now? What will happen?
Children complete primary school and cannot construct even a simple sentence in English? What is happening to the education sector in this region? I will not mention the results of PLE, “O” Level and the most resent “A” Level in this region. Every thing is pathetic.
It is even worse with the women in the rural Acoli sub region. We yell of empowerment and gender sensitivity yet out of 10 women less than five can write their names. And the rest, they must be helped to sign!!! Finger prints in the 21st century, my foot!!!
It’s not enough to cry out loud. What are we doing about the finger print syndrome that has invaded our society?

Prayer breakfast at the bishop’s house

O ye foolish Galatians (Amuru Leaders)! Who has bewitched you? Before your very eyes Jesus Christ was clearly portrayed as crucified Galatians 3:1 was a quotation that the Bishop of the Diocese of Northern Uganda, the Rt. Rev. Nelson Onono-Onweng made on Thursday 28 Feb 2008 morning during a prayer breakfast at his residence.

Amuru District Leaders were advised to bury their political differences and begin to serve their people. After one and a half years in leadership, they have spent time fighting each other over non substantial issues. It was time they begun working at making straight paths, filling every valley, leveling the mountains and hill, crooked roads be made straight, rough ways smooth, so that the people see the salvation of God.

Bishop Nelson urged them to listen to the crying voice “the voice of the displaced people who are returning home, can they be given a chance to return in peace, but the people will not have peace if there is no peace among their leaders at the District”.
Mr. Omac, the LCV Chairman acknowledged that as leaders, they had spent time fighting each other in the council instead of serving the felt needs of people and on behalf of his other fellow leaders, he apologized for all that had gone wrong. He promised that they would begin to work in unity.
Posted by Willy Akena at 12:49 PM No comments: