A life changing story. Why I could not sleep this night. 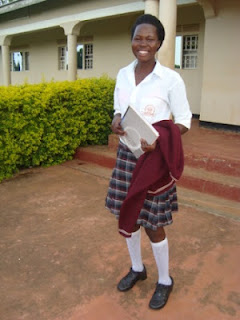 Picture of Aloyo Paska in front of Graceland Girls School Administrative block The time is 3:49am on Monday September 24, 2012, I could not sleep, I found myself shading tears after seeing life story of Aloyo Paska in a dream that woke me up to write it down, a total orphan who lost both her parents to HIV/AIDS while she was still young. Aloyo Paska’s Father was called Lumumba Patrick hailing from Kitgum District and the Mother was Angwech Jenny from Nwoya District. During the war Angwech came to town to buy a few things and got in touch with Lumumba Patrick now the late and somehow she felt in love with him and they later got married. They stayed in Gulu town because Lumumba was a business man. Being a business man somehow he lived a reckless life and contracted HIV/AIDS and died a few years later. His wife Jenny died later leaving two children Aloyo Paska and Onencan Stephen, Aloyo means I am a winner while Onencan means you see poverty. These two names are very contradicting. Lumumba Patrick did not leave behind a will and had no proper relative to take care of the two children. The Mother in law took the two children to be her own and tried to educate them in the rural school in Nwoya district, because of the intensity of the war between the Lord’s resistance army and the government of Yoweri Museveni, the family were displaced in Anaka town ship where Aloyo studied for her primary leaving and passed well to join a day secondary school. She was admitted to Keyo Secondary School which was by then displaced in Gulu town, later she transferred to Gulu High School where through the Mothers Union, she was picked to be paid by St. Peter’s fund. She sat for her Ordinary leaving Examination and did not do very well, she however got admission to go to Advance level but the committee of St. Peter’s fund said they could no longer continue to support her fees. Aloyo then went back to the village now corner Nwoya , when she saw that her only younger brother Onencan was not going to school because of school fees, she decided to start teaching in a primary school inorder to get money to pay her brother Onencan Stephen who had done his primary leaving examinations and admitted to Pope Paul VI Anaka. Aloyo stated teaching as untrained teacher at Kinene Primary School and was being paid 70,000 (seventy thousand Uganda shillings) monthly. Aloyo was able to save some money almost enough to pay her younger brother fees for a term. Unfortunately as she was not a trained teacher she needed someone to train her in lesson preparation and scheme of work. Aloyo became close to one teacher in the school who could help her to prepare her teaching materials. The grandparents got information that Aloyo was in love with the teacher and one day they decided to spy on her and found the teacher guiding her in lesson preparation, they then said the teacher was in love with Aloyo and forced her to marry the teacher. They even made her to sleep in the home of the teacher. This story did not please Aloyo who had a plan to educate her brother and possible also find ways of continuing with her studies. Aloyo got so disturb by this turn of events that she almost became insane, we got the news and asked her to come and stay with us in Town. While in town with us, Aloyo continue going to church and became very active in church activities like dancing in the church youth groups, reading lessons, sharing in fellowships and many other activities. Bishop Johnson saw Aloyo and asked why she is not going to school while the rest of her peers where going to School, she then narrated her story above , the Bishop decided to help her go back to school after one year out of school. Luckily enough Aloyo was admitted to Graceland Girls School in Gulu and the Bishop paid her fees for two years (senior Five and Six). Now Aloyo is set to sit for her Advance Level Education in November and hoping to join University or other institution of learning. 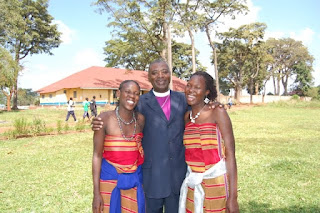 Bishop Johnson in a photo with Aloyo on the right and her friend I ask you to pray for Aloyo Paska as the Bishop recently wrote a letter to me saying “Willy this is my last support to Aloyo Paska, I had promised to pay her upto Senior Six and I thank God that I have fulfilled my promised” I have not yet shared this letter with Aloyo, I am waiting for her to first complete her Exams and then find appropriate time to share this letter with her. Remember Aloyo was first sponsored by St. Peter’s fund basing on the fact that she was a total orphan and later dropped, which landed her into teaching and then forcefully marrying a man not because of her choice. The Bishop took care of her fees for two years and I very much appreciate St. Peter’s Fund and the Bishop for their support. I personally could not pay Aloyo’s fees because I already have four of my children in Secondary school and always paying them by installment as my salary cannot complete payment at once. Our last child is in primary one. So pray for me as I pray for these children that God has given us. We have taken Aloyo as our child and she has now lived with us for six years and we do not want her to experience the same after her senior six. So pray for us. You can send an e-mail to me at akenawilly@yahoo.co.uk or call me on + 256 (0) 772667 334
Posted by Willy Akena at 10:34 PM 1 comment:

By Emmanuel Omona President Yoweri Museveni has commended the Late Bishop Gideon Allan Oboma for the enormous struggle to bring peace in Northern Uganda. The President’s message in a letter read by the Minister for Internal Affairs, Eng. Hillary Onek at St. Phillips Church in Gulu High, described the Late Bishop Oboma as one of the most hardworking religious leaders, who dedicated their life to bring peace in northern Uganda. The president called on other religious leaders in Uganda to emulate the late Oboma so that Ugandans borrow a leaf from him. The Late Bishop Oboma died early this month from St. Mary’s Hospital Lacor in Gulu District after a long illness. His death has caused shock among the Acholi leaders who think that he has left a big gap that would not be filled immediately. He was buried at the St. Phillips Cathedral in Gulu High School. Born in 1932 at Atiak, in the present Amuru District, the late Bishop Gideon Allan Oboma served as the fifth Bishop of the Diocese of Northern Uganda from 1979 up to 1998. He was educated at Atiak Church of Uganda, Lira Palwo , Buwalasi Primary Teacher’s College. Between 1964 and 1965, Oboma trained at St. Andres’s Community Centre in Mbale as a ‘Tent Maker’ priest. He was made Deacon at Christ Church, Gulu District in 1976, and practiced his priesthood at St. Philips Pro Cathedral Gulu, in 1979. Oboma’s commitment to the service of the Lord did not go unnoticed, as he soon won a place to study for a Diploma in Higher Education at Trinity College, Bristol, in the United Kingdom between 1981-1983. 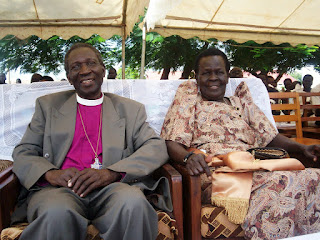 Bishop Gideon Allan Oboma and Blandina Oboma (both of them have gone to be with the Lord) From 1983 to 1985, he was at Oak Hill Theological College, London from where he graduated with a Bachelor of Arts (BA) degree in Theology and Pastoral Studies.
Posted by Willy Akena at 2:55 PM No comments:

The Bishop passed on from Lacor Hospital on Thursday 6th September 2012 at around 10:30pm.Burial arrangement will be communicated later. Allan Oboma served as the fifth Bishop of the Diocese of Northern Uganda from 1979 up to 1998. Gideon Oboma was born on 22nd October 1932 at Atiak in Amuru District formerly Gulu District.He was baptized on the 15th April 1934 in infancy and later confirmed. He was educated at Atiak Church of Uganda, Lira Palwo ,and Buwalasi Primary Teacher’s College. In 1964-1965 Allan trained at St. Andrew's community centre , Mbale as Tent Maker priest. 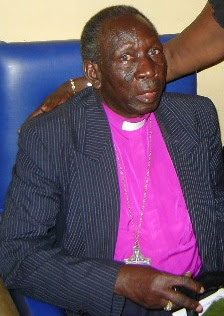 He was made Deacon on 25th April 1967 at Christ Church Gulu and Priested at St. Philips Pro Cathedral Gulu, in 1969. He went to Bishop Tucker Theological College from 1972-1975, where he graduated with a Diploma in Theology from Makerere University, Kampala. In 1976 he was appointed Dean of St. Philips Pro Cathedral Church, Gulu and Chaplain Gulu High School. He was appointed an Assistant Bishop of Northern Uganda on 14th January 1979. Allan was made an acting Diocesan Bishop when the Diocesan Bishop was in exile. He went to Trinity College Bristol in England from 1981-1983 and graduated with a Diploma in Higher Education. From 1983-1985 he was at Oak Hill Theological College, London England and graduated with a Bachelor of Arts (BA) degree in Theology and Pastoral Studies. Bishop Allan Oboma retired in May 1998. He and his wife Blandina Oboma (RIP) are blessed with four children.
Posted by Willy Akena at 1:39 PM No comments: