Northern Uganda leading from behind 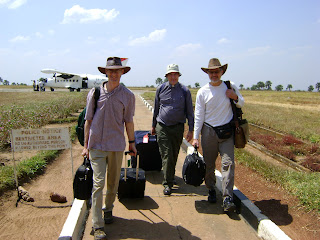 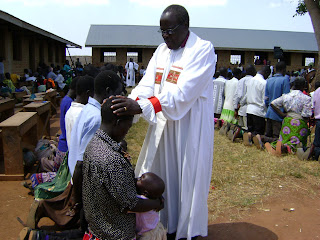 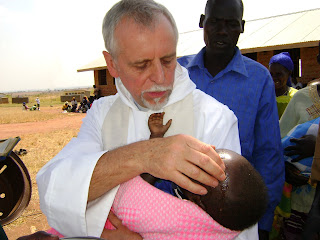 A team from Bristol visited Gulu recently. The visit came at a time when Bishop Nelson is saying bye bye to the Christians of the Diocese. The Rev'd Canon Stuart Taylor who has a heart for the people of Amuru accompany Bishop Nelson to Amuru Parish in the New District of Amuru. 147 Christians were confirmed and Canon Stuart baptized seven (7) children. Rev'd Philip Rowe, Rev's Chris Dobson and Walter Dirks joined Canon Stuart in Gulu for two days. They visited returned sites, camps and world vision. Amuru district emerged as the last in the recently released Primary Leaving Examinations. Out of the 92 District in the country Amuru led from behind. A sensible person may ask why? The obvious reason is the long war that has seriously affected this place. Other related reasons could be: - poor personnel, lack of interest by teachers, pupils and parents. Infrastructure is an obvious blame. Unless something is done now, the trend may not change easily. For the whole district to get only one first grade is a nightmare.
Posted by Willy Akena at 8:48 AM No comments: Links to this post

Harvest or something else

Yesterday marked 23 years of Museveni's rule as our President. One of the key issue in his address was Northern Uganda. There is relative peace and people are returning to their homes. We pray the trend continues.
Below is an extract from the New Vision-government owned paper.
Willy

With Achayo, a three-month-old baby suckling from her breasts, Ms Jacqueline Apio, 21, is sandwiched between two UPDF soldiers and a young Sudanese girl.

Ms Apio looks pensive and uncertain about what the future and the four parentless girls who are under her care. Like Anek, who is one-and-half-years-old and Akello, one-year-old, Achayo lost both her parents on Friday last week. Her parents were part of a group of Lord’s Resistance Army rebel fighters who were killed on Friday by the UPDF in an area between Duru and Suke, in northwestern Democratic Republic of Congo.

An abductee, only freed by the army last week, Ms Apio has taken the mantle of raising four children on her own. Despite the insurmountable challenge, apart from breast feeding her own daughter, Achiro, aged 1, Ms Apio is sharing her breast milk with Achayo.

Excited by camera flashes from a battery of journalists, Achayo stopped suckling from Ms Apio’s breast, licked her fingers and gazed at the reporters called to the Chieftaincy of Military Intelligence (CMI) headquarters in Kampala yesterday to witness the arrival of former LRA abductees, before she recoiled in her strange mother’s breasts.

One of the adopted children, Anek, is visibly distraught. She sustained a bullet wound on her left leg and is being treated by the army doctors, officials said. “Our soldier wanted to save Anek. He ordered her father to surrender but he refused. He held her with one hand while another held a gun. He wanted to shoot but the soldier shot him and the bullet that killed the father got her on the leg,” said Capt. Deo Akiiki, the publicist of the UPDF’s latest military offensive against the LRA, dubbed “Operation Lightning Thunder”.

Ms Apio, the four adopted children and the young Sudanese girl were flown from Dungu, the UPDF tactical headquarters in DRC to Kampala to be reunited with their next of kin, according to CMI chief Brig. James Mugira. “This is the horrific situation our people are exposed to by Joseph Kony,” said Brig. Mugira, as Achayo and Achiro competed for Ms Apio’s attention.

Apio said when the UPDF attacked their hideout, the rebel fighters ran away in disarray, leaving women and children helplessly behind. Speaking through an army interpreter because she could only speak Luo, Apio said she was abducted by LRA from Opit in Gulu in 2002. In the bush, she was forced to marry Lt. Okello Palutaka, who was among the 10 rebel fighters killed on Friday.

The army also paraded two LRA fighters, Sgt. Peter Okot and Sgt James Onen, who were abducted by the rebels in 1997 and 1995, aged 12 and 10, respectively. “We used the first month for planting and now we are harvesting,” Brig. Mugira, accompanied by the army and defence spokesman, Maj. Felix Kulayigye said.

He said among the captured equipment, rescued fighters and those taken prisoners, the UPDF is able to tell the financiers and collaborators of the LRA, even if he insisted he was not at liberty to disclose that information to the press.
Posted by Willy Akena at 8:38 AM No comments: Links to this post