Commitment is a choice 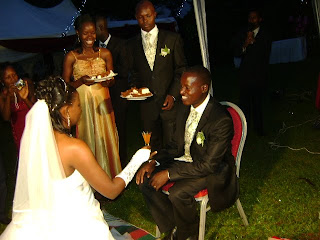 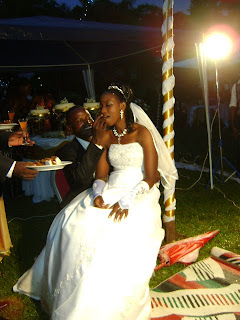 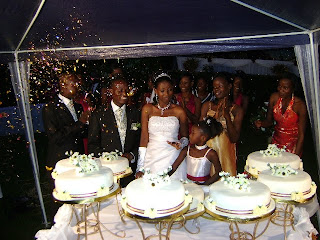 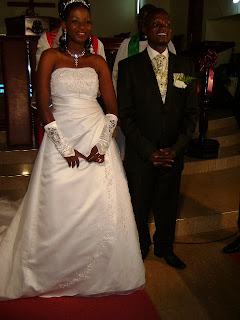 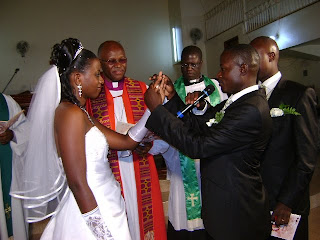 The Assistant Bishop of Kampala Rt. Rev. Zac Niriygire said " Commitment is a choice" the Bishop was officiating at a wedding of Hope Atim and Titus Tumusiime held at Church of The Resurrection Bugologi on Saturday 24th. The Bishop was preaching from the Book of Ruth, chapter 1, where Ruth said to Naomi “Don’t ask me to leave you! Let me go with you, wherever you go. I willgo, wherever you live, I will live. Your people will be my people and your God will be my God. Wherever you die, I will die and that is where I will be buried. The wedding was attended by many people including the Rtd Bishops of Northern Uganda, Nelson Onono-Onweng, and Mama Brenda, Rtd Bishop Allan Oboma, the Diocesan Secretary Rev. Canon Ayela, and many other people from across the country. Hope is the first daughter of Bishop Johnson Gakumba. While speaking to the newly wedded couple Bishop Zac, said "I promise you Hope and Titus that you will meet challenges in your marriage". Bishop Zac said some of the challenges will come from outside, while others will come from within. The Bishop appealed to Hope and Titus to learn to forgive one another. The Bishop concluded by saying the Hope and Titus must run to Jesus Christ for answers to issues in their marriage.
Posted by Willy Akena at 11:44 AM No comments:

A Clergy daughter returns from LRA captivity after 12 years 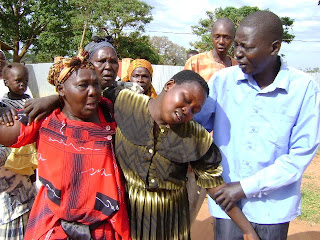 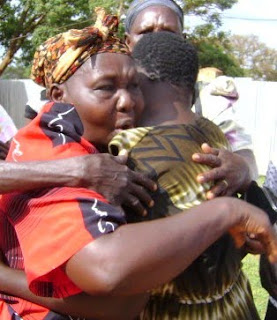 Adiya Lillian daughter of the Late Rev. Peter Ben Ochan and Mary Ochan (Vice president of the Mothers Union) today unites with her mother, brothers and sister after spending 12 years in the bush. Lillian was abducted by the LRA in May 1998 when she was just in Primary Five at Gulu Primary School. The LRA came at night up to the primary school and abducted a number of children, some of them returned while others died. While receiving her daughter, Mary said " I have been praying to God to protect you just like He did to Daniel in the Bible". Lillian on her part narrated how on several occasion she had tried to escaped but could not make it, until January this year, that she finally escaped, from January 2010 she has been staying with different people in Congo, including the UPDF, the Congolese army as well as villagers. From a girl of about 10 years in 1998 to now a woman with two kids; - Olal and Lamwaka Mercy, Lillian is not yet very sure how she will look after her siblings without the husband and with no proper education. To make matter worst, Lillian almost fainted on learning that her father is dead. With your prayer and support Lillian will have a bright future.

Report by Willy
Posted by Willy Akena at 5:24 PM 2 comments:

In Gulu the way of the Cross was led by the Archbishop of Gulu Archdiocese His Grace John Baptist Odama, and the Bishop of the Diocese of Northern Uganda Johnson Gakumba. The about 6 Kilometres walk attracted a large number of the faithful. I have given you some pictures of the event in Gulu and one from Kampala where His Grace Henry Luke Orombi together with the christains in Kampala participated in the walk. Below is also a story that appeared in the New Vision. 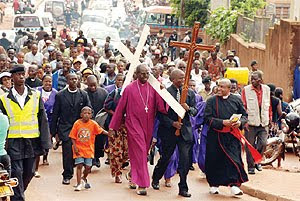 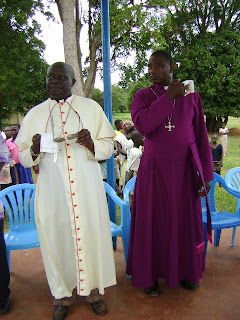 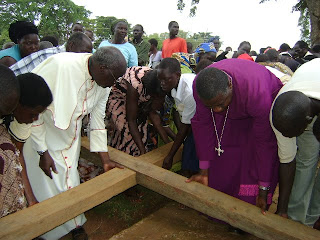 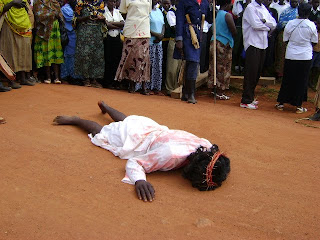 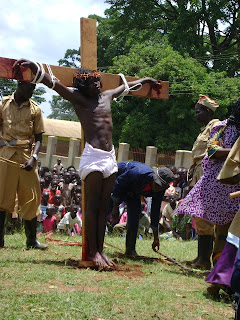 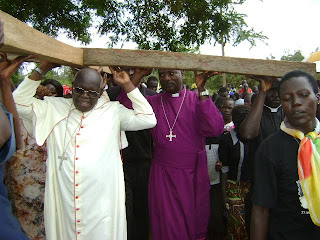 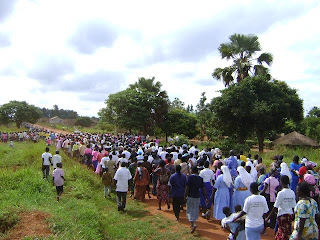 The Archbishop of the Church of Uganda, Luke Orombi, carrying a cross in Kampala yesterday, in remembrance of the death of Jesus
By Ben Okiror

RELIGIOUS leaders have defended their involvement in the Kasubi tombs prayers last week, which had been criticised by some Christians for the site’s association with ancestral worship.

The prayers were led by Archbishop Cyprian Lwanga of the Kampala Catholic Archdiocese, who was wearing a bark cloth sash for the occasion.

He was joined by leaders of the Anglican, Pentecostal and Orthodox Churches as well as the Muslim faith.

The religious leaders argued that they were only there to mourn with the Baganda and did not get involved in witchcraft. Pastors of some Born-again churches had objected to the presence of Christian leaders at the event.

Michael George Kizito, the president of the Watchman Africa Discernment Ministry, argued that Christians should not associate themselves with the tombs, a place where witchdoctors used to go to renew their powers..

“The burning of the tombs was unacceptable,” wrote Kizito in The New Vision yesterday. “However, there is no way a true Christian can pray to God to rebuild a temple where satanic rituals, such as devil invocation, pipe smoking, ancestral possession, fire altars, ritual cleansing and worship of the dead are practised.”

Pastor Anthony Owalu of Hope Restoration Ministries, while also condemning the burning of the tombs, said it was wrong for the religious leaders to pray at the Kasubi site. “They should have called for a prayer elsewhere and consecrate that place (Kasubi) to God. I would not want to be associated with such a place as a religious leader because of the traditional rituals that are being practiced there.”

Archbishop Lwanga has rejected the accusations, saying his critics were uninformed. He said Jesus Christ asked his apostles to spread the gospel to anybody without boundaries.

He cited Apostle Paul’s visit to Athens where he explained to idol-worshippers that the ‘unknown god’ was actually the Almighty God.

“We were there for a good purpose and nothing about witchcraft was mentioned,” Lwanga said. “We have bishops buried in the church compound, is that witchcraft? Ignorance prompts people to make such sweeping statements.”

Sheikh Hassan Kirya, the spokesperson for Kayongo, said they were there to pray for Kabaka Mutesa I since he was the first Muganda to embrace Islam. “Islam teaches us to pray for the dead and because Mutesa I did a lot to spread Islam, he is more important to us than anyone else,” Kirya said.

He explained that a Koran and the kettle used during the king’s ablution were lying on his tomb, according to the Islamic tradition. “The mosque in Kasubi was the first in Uganda, built in the 1880s,” he noted.

He added that the Muslims who went for the Kasubi tombs prayers were not part of witchcraft or the rituals performed that day.

Pastor Martin Sempa of the Makerere Community Church said he was there to ask God “to extinguish the fires in grieving people’s hearts that were ignited by strife”.

He agreed that there were some unchristian cultural practices by the kingdom but these were changing because of the church’s involvement. “The policy of disengagement is abdication of our responsibility as religious leaders,” Sempa said. “Even the Bible teaches to mourn with those who mourn. A family is a family and if the behaviour of some members may be unworthy, it does not mean you don’t attend family functions.”

The retired Anglican bishop of Mityana, Dunstan Bukenya, said the event was of critical nature and those who denounced the prayers were wrong. He said Kasubi was a burial place like any other. “If a night dancer went to a grave, it would not stop other people from visiting it.”

However, his successor, Stephen Kazimba, who did not go to Kasubi because of other commitments, said he would have first established what would take place to ensure it did not conflict with his faith.

Kazimba last year led a team of two other Anglican bishops and five clergy members to destroy a traditional shrine in a village in Mityana after the owner repented.

He however absolved his colleagues who went to Kasubi, saying they could have gone to show solidarity with the mourners without knowing what else was taking place there.

However, he said, any rituals performed were exclusively the business of those concerned.

“I am a Christian who lives among people of different religions but I do not take offence at their practices,” he noted

Church leaders are encouraged to go where satanic practices are performed to preach the gospel, he added.

He called the discussion diversionary and reiterated Mengo’s call for an independent probe into the cause of the fire.

“Our concentration is on investigating who exactly burnt the tombs.”
Posted by Willy Akena at 8:12 PM 1 comment: