Changing the face of Northern Uganda 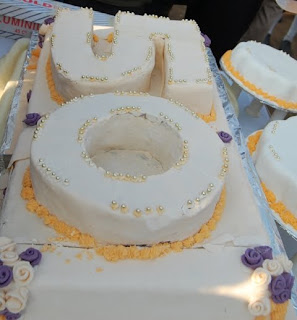 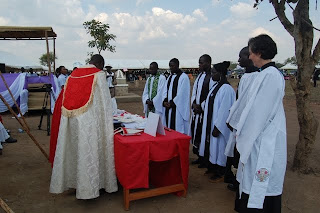 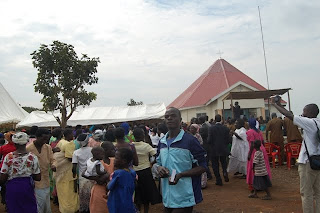 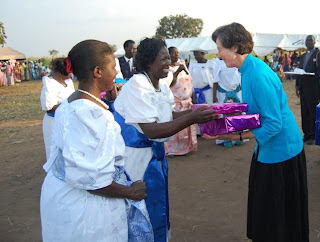 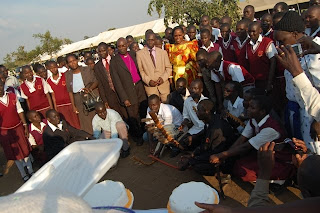 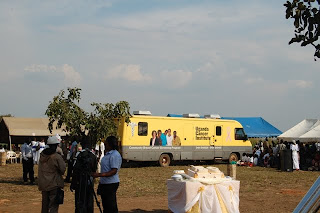 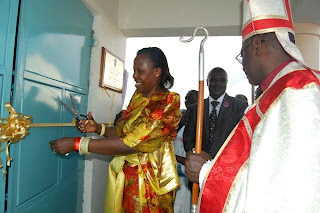 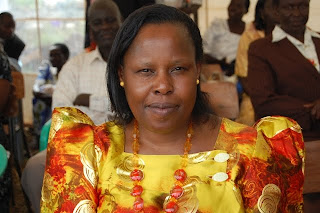 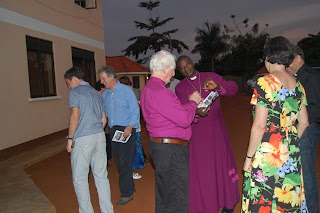 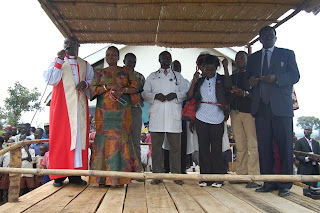 Bishop Johnson introducing a team of Doctors
On November 26th the Diocese of Northern Uganda celebrated 107(1904-2011) years of arrival of Christianity into Acholi land and 50 (1961-2011) years of her existence as a Diocese in the Province of the Church of Uganda. This year’s celebration was the most colourful one in 42 years. According to elders, the last celebration that was held on the exact spot was in 1969, during the reign of the Late Archbishop Janani Luwum, who was then the Bishop of the Diocese of Northern Uganda.
President Museveni asked the people of Acholi to forget about the war as the government continues with its reconstruction efforts in the region.
At the celebrations which took place at Keyo Hills, Lamogi Sub-county in Amuru District, the President said forgiveness and embracing reconciliation are cordial virtues that could heal the wounds caused by the LRA insurgency.
“Bitterness will not take this area anywhere, people must forgive and reconcile with one another as the region redevelops,” he said, in a statement read for him by Minister for Presidency Kabakumba Masiko.
Mr. Museveni re-emphasised the government’s commitment to redevelop and change the face of the region that was wrecked by a two-decade war, leaving many people without viable livelihoods.
The President noted that the already existing reconstruction interventions would be enforced further to realise real rehabilitation. “The government has the readiness and will to do everything to stop bad memories of the war among the people through reparations. We must have the will to help our people out of bondage,” the President said. The President pledge to help the construction of St. Philips Cathedral and other churches using the Northern Uganda Reconstruction Programme and others.
The Anglican missionaries journeyed up to Keyo via Agung in Anaka Sub-County, Nwoya District. At Agung, they knelt down to give thanks and pray and that is how the name Agung, which means kneeling, came about.
At Keyo village, a big cross (Musalaba) was planted as a monument for the missionaries’ arrival in Acholi. The cross lent its name to the village which is now commonly known as Musalaba village. It is located in Lamogi sub-county, Amuru district, about 11 km from Gulu District. The cross was destroyed during the war; sources say the man who looted this place was looking for mercury which was put as a lightening conductor.
The missionaries wrote on the concrete base of the cross a declaration to mark the spot saying (here, the gospel was preached to the people of Acholi in 1904. Another concrete block conveyed the same message in the Acholi language “Kany Gikwongo tucu iye Jiri bot jo Acholi 1904”
A memorial Shrine like the one at Namugongo has been built and officially opened.
Bishop Johnson Gakumba called on the Acholi’s sons and daughters who were educated by the Church to give back to the community by contributing towards the building of churches.
At least two Deacons were ordained and these are Rev. Nyeko Robert Luku and Rev. Merilyn Wilson –the first European to be ordained in the Diocese of Northern Uganda. While delivering his sermon the Assistant Bishop of London, Rt. Rev. Sandy Miller called on the Bishop together with the clergy to be strong like Joshua in the bible. The bishop said things can be done because of intercession. “Get Godly men and Women to pray for you” the Bishop Sunday said
Four Deacons were priested and these were Rev. Otto Zachariah, Rev. Olara James, Rev. Kibwota Samuel and Rev. Kevin Olweny.
As part of the day’s event, a medical camp was organized by Dr. Margaret Okello a consultant from Mulago Hospital assisted by fellow doctors and nurses from Kampala and Gulu. The Uganda Cancer Institute took their vehicle for screening people with cancer. The medical services were as a way of giving back to the community, because Dr. Margaret Okello comes from this area of Musalaba and she is one of the first Acholi girls to go to the University to do medicine.
Bishop Johnson together with his Guest Bishop Sunday Miller led a six kilometers walk that attracted more than one thousand people. This was to demonstrate the power of God on this land of Keyo Musalaba which had been abandoned and vandalized during the LRA war in Northern Uganda. A visit to this place will certainly show a changing face of the Diocese of Northern Uganda. Many people now see this as a new day-a new beginning in the history of the Anglican Church in northern Uganda. Already more than 16 churches are under construction.
A day before the celebration a mass wedding of 38 couples took place at Musalaba.
Posted by Willy Akena at 5:12 PM No comments: 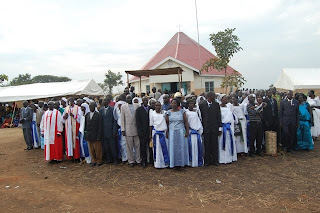 Today Friday 25th November 2011 a total of 38 coupes got wedded at Musalaba Keyo by Bishop Johnson Gakumba assisted by Retired Bishop of Kitgum Diocese. This is part of the big celebration being held here at the place where the first Church missionaries’ society preached the Gospel to the Acholi people in 1904. While delivering his sermon, the Bishop Mac Baker Ochola 11 called upon the newly wedded couples to remain loving. Picking from the so many Acholi tales, the Bishop challenged the young generation to think carefully before choosing a partner, because some people are attracted because of beauty or money.
Tomorrow Saturday we will have ordination of deacons and priest and the preacher is Bishop Sandy Miller. One of those to be ordained is Merylin Wilson, who is a lay curate in London
Posted by Willy Akena at 8:23 PM 1 comment: