In loving memory of Blandina Oboma 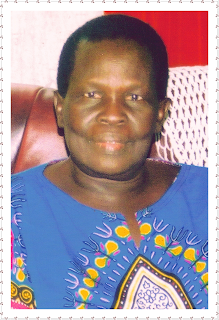 Mrs Blandina Oboma died on 30th June, 2009 at 6:30 am at the age of 69. Burial took place at St.Philips Cathedral Gulu. Below is her Life History. She was suffering from Diabetic and Hypertension.

Her life and Education
1950-1954 (P1-P4) she studied at Keyo Primary School while staying at Mr. and Mrs Ocacimo O Onyac who was the Headmaster of that School. They were well looked after together with other children.

1955-1956 (P5-P6) she moved to Atyak Pupwonya Church of Uganda Primary School and studied P5-P6 and sat the Primary Leaving Examination and passed very well and Mr. Sylvester Ayo Otogo was the Headmaster of that school.
1956-1957 She was admitted to St. Monica’s Girls’ Junior Secondary School where she studied junior secondary one and two.

1958 She studied at St. Hilda’s Teachers College for Women specializing in teaching infants. It was a one year course.
1959 She was posted to teach at Koch Goma Church of Uganda Primary School where she taught for one year. The Headmaster was A.O. Ociti 11. While there, she also taught some adults at Community Development. She taught Reading and Writing, etc.
1960-1961 As she had just been married traditionally to Gideon Allan Oboma, both of them were transferred to Namukora Church of Uganda Primary School. Gideon A. Oboma was appointed the Headmaster of the School.

20th June 1960 They wedded in Holy Marriage Matrimony at Namukora Church, officiated over by Rev. Eromiya D Ogony who was the parish priest of Omiya Anyima Parish which extended as far as Opari in Southern Sudan. Their matron was Miss Filda Adoch who was teaching at Akilok. She was then married to Silvano Oloya the late, who was also a school teacher. The best man was Mr. Wilson Kitara the late who was teaching at Omiya- Anyima Church of Uganda Primary School.

September 1982 She accompanied her husband and they went to Trinity College, Bristol, England where she studied for a Certificate in Theology.
1983-1984 They moved to Oak Hill Theological College in North London UK. She continued with her studies along side her husband. She studied Church History and other subjects. She also studied Mothers’ Union work.

June 1984 She returned to Uganda leaving her husband Bishop Gideon to continue with his studies at Oak Hill Theological College. She continued to teach in various ways. They started the first tailoring school in Gulu Together with Mrs. Rachael Obol the late.

1985-1987 The daughter of Canon Mac Baker Ochola 11, Joyce Adong died after abduction. Canon and his family were returning from Canada where he has completed his Theological Studies.

4th May another death occurred at the home of Bishop Gideon and his wife Blandina. Three members of their family were killed in cold blood. The three people were their son Barnabus Rwot Okonya who was in senior 3 in Gulu High School, Jacob Ocen and Pauline his wife. They died leaving Miriam a baby girl of only three months old.
May, 1887 The Archbishop at that time Dr. Yona Okoth arranged and airlifted us to Entebbe; first Gideon and some children, then later Blandina and some children of Bishop Canon Mac. Baker Ochola 11 who as the Diocesan Secretary at that time they were returning from Canada.

The Archbishop hosted Bishop Gideon and his family for three months after which they moved to Bishop Tucker Theological College where they were displaced for three years. The Bishop of Mukono diocese then the Rt. Rev. Livingstone M. Nkoyoyo allowed them to perform their pastoral ministry in confirmation services. Nkoyoyo later become Archbishop of the Church of Uganda.

Mama Blandina A Oboma was elected Mothers’ Union President which she did for six years. They really worked very well covering the diocese. Together with the Mother’s Union Worker at that time, they are still remembered for what they did.
1993 They visited United Kingdom for some few months. They then visited the Mary Surmer House, the Headquarters of the Mothers’ Union in London UK.

November, 2008-March 2009 Blandina and Bishop Gideon visited United Kingdom. As the weather was bad Blandina was not quite well and she did not travel much. When they returned her health did not improve much.

On June 27th 2009 she spend a night in Gulu referral Hospital and on 28th June she was taken to St. Mary’s Hospital Lacor. There was no improvement on her health.
ON 30th June, 2009 at 6:30 am on St. Peter’s day, Mama Blandina went to her Lord and Saviour. She left behind four biological children, two girls and two boys and indeed many children whom she had been caring for.

She had been a very hard working, dedicated, faithful, loving, caring and friendly lady. She died in Christ and may she rise in glory. May Praise and Glory be to Him. Amen
Posted by Willy Akena at 11:26 AM 2 comments: