Out of School because of fees


Out of School because of fees 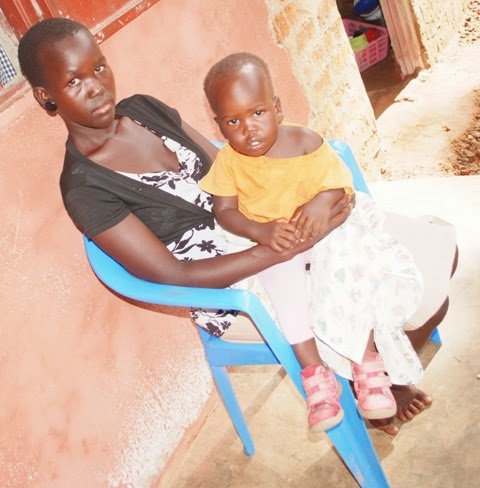 Aber Stella lost both parents during the war with the Lord’s Resistance Army. She joined Women Development Centre in February 2014 and registered for hairdressing course. Towards the end of term one, the centre sent students back home for failure to pay the fees requirements. Stella (A child mother) who is a mother to Rwotdit Jerald was among students sent home to get school fees. Unfortunately, when she went home her Uncle told her that he does not have money to continue paying her. Stella then stayed at home and as second term opens in May, Stella could not return to the centre. Instead she left the home of his uncle and started staying with a grandmother and digging inorder to make end meets. The Good news came when Marie said they could help to support the 11 students. I struggled to get Stella back and finally on Friday 30, Stella came to me and I told her to come back to school on Monday 2nd May 2014. 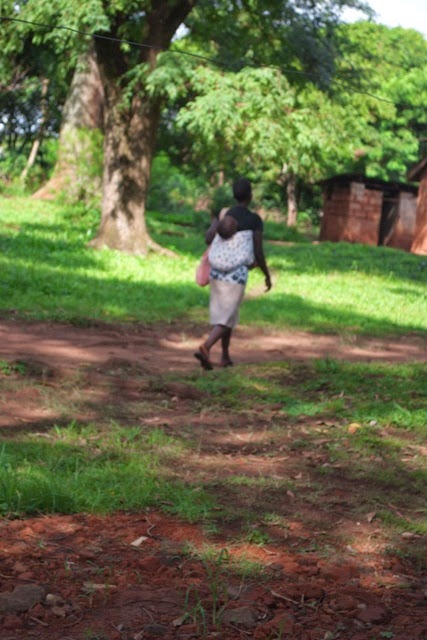 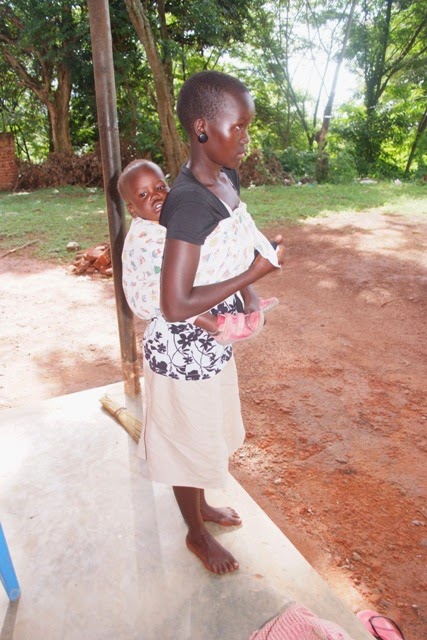 I am also trying to get the rest back to the centre because Marie has accepted to pay their fees. Are you also willing to pay one or two students at the Centre? The Total cost per term can be just about 100 US dollars per term and we have only three terms in a year. The hairdressing course takes only one year and thereafter the students can be able to support themselves and their children.

Posted by Willy Akena at 8:54 PM No comments: 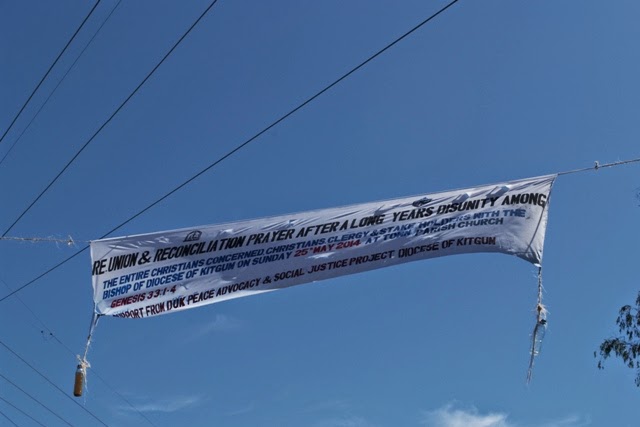 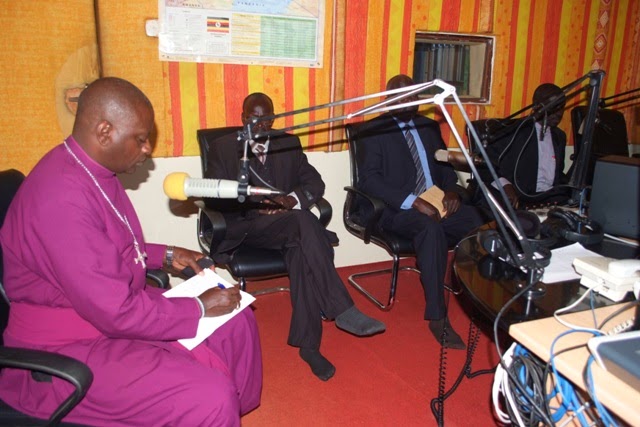 The conflict in Kitgum Diocese started about 12 years ago when Bishop Benjamin had just been consecrated. Many attempts were made at resolving the conflict. The latest one being a team of the Peace and Social Justice Commission sent from the office of the Archbishop of the Church of Uganda, His Grace Stanley Ntagali.  This latest reconciliation attempt was initiated by Bishop Benoni Ogwal in August 2013 where it was decided that a reconciliatory prayer be organized, accounts of the parish which were closed be re- opened and the court case be dropped.

Bishop Johnson took with him the Archdeacon of Nwoya Archdeaconry Rev John Ochola, Mr. Mawa Francis-Chairman house of laity and Rev Canon Willy Akena the Chaplain.
The team left Gulu Sunday morning and by 9:00am they had arrived in Kitgum. They went to straight to the Bishop’s residence in Mican. The Bishop was not at home when the team arrived, but Margaret was at home and welcomed the team.
When the Bishop came, and had a meeting with the team over breakfast and prepared to leave for the venue at Kitgum Town Parish. 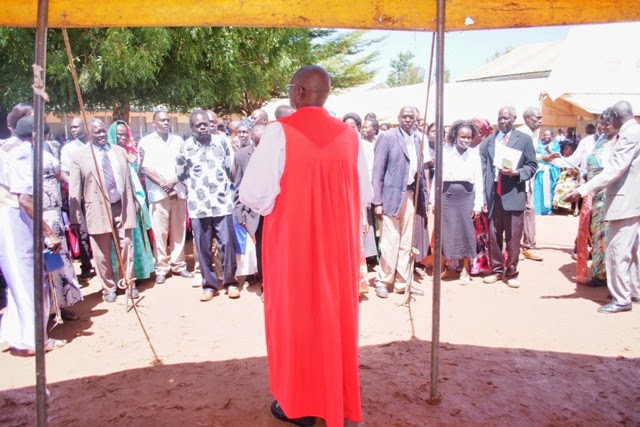 The Bishop was hesitant to picking his clerical robes, and the pastoral staff. He said he will not participate in the service but instead he will be prayed for. After pleading with him, he finally accepted to take the robes and pastoral staff with him. The team was warmly welcomed at the Ground of the St. Janani Luwum Church by excited Christians who had been praising God while waiting for the arrival of Bishop Benjamin, Johnson Gakumba and the entourage. After greeting the Christians the team then went inside the Church for robing. 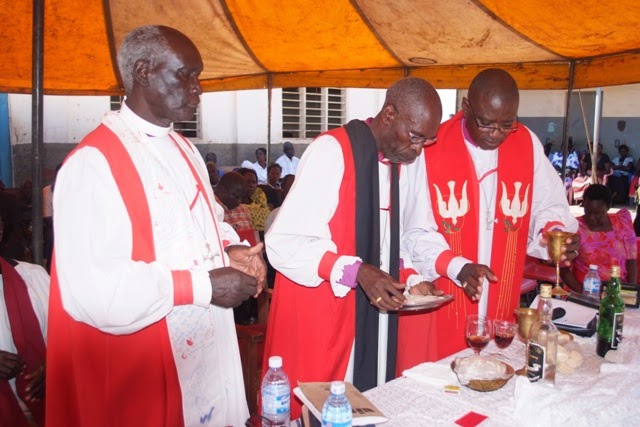 The service started with praises and then the Vicar of St. Janani welcomed a section of the Christians who turned up, and then introduced Bishop Johnson Gakumba who came to represent his Grace the Archbishop of the Church of Uganda. Bishop Johnson then gave guidelines regarding the service.  The service began by Bishop Johnson Gakumba welcoming back the Concerned Christians and other people who had left the Church for various reasons. A number of people  responded by coming to the front and Bishop Johnson led them in prayer of repentance using the Lwo prayer book from page 1 where it says “ If we say we have no sin  we deceive ourselves  and there is no truth in us ...” In Lwo it says, “ Ka wawaco ni wape ki bal ci wabwole abwola kenwa, ada  nongo pe……” Thereafter he gave an absolution and received  them back in the church.   This was followed by litany prayers. After the litany prayer the Bishop then led the rest of the Christians to prayer of repentance using the Story of the Prodigal Son in Luke Gospel Chapter 15:15-32. When the lost Son came back, the brother was not happy, because of the treatment given to him by his father, Bishop Johnson said even the son who had remained at home was also lost-meaning even those who had remained in the Church were lost and needed repentance and reconciliation with one another.

The service continued with the Holy Communion Service, with three readings Psalms 133, Romans 12: 9-21 and Matthew 7:1-12. Thereafter, six people gave testimonies. They included:-Representative of the Concerned Christians, who said, “there is no more concerned Christians in Kitgum Diocese, we are all one in Christ.” Representative of the Clergy testified that   “let this repentance and reconciliation be from the heart”. Bishop Macleord Baker Ochola II gave his testimony followed by Bishop Benjamin Ojwang “I stand to declare total repentance and forgiveness to those who in one way or the other I have offended or have offended me. It is now time for a new era”.  RDC Kitgum Captain Santo Okot Lapolo testified “Today I will sleep soundly” and finally the LCV Kitgum said “Today a miracle has taken place”.
The Sermon was delivered by Bishop Johnson Gakumba who appealed to the Christians of Kitgum not to give room to the devil again, to settle their differences quickly before it escalates, to love one another and live in Peace with all. The Sermon was followed by offertory and Holy Communion conducted by Bishop Ochola and Bishop Benjamin. The final blessing was done by all the three Bishops.
After the service key people had lunch at the residence of Retired Bishop of Kitgum Macleord Baker Ochola II. After Lunch a team went to Mighty Fire FM who gave airtime on their radio for one hour and fifteen minutes. The team included Bishop Johnson Gakumba, Bishop Benjamin Ojwang, B.Y Opio, Dr. Okun Okaka and Rev. Simon Peter Odur.

Christian of Kitgum expressed joy and happiness that the conflict that had separated them is now over. We thank God and the Archbishop of the Church of Uganda for standing by the people of Kitgum in the time of need. We continue to pray for genuine repentance, forgiveness, reconciliation and transformation of the people.  We acknowledge there are issues raised by the Synod that still needs to be addressed.
Signed
RT.REV. JOHNSON GAKUMBA
DIOCESE OF NORTHERN UGANDA/REPRESENTING HIS GRACE THE ARCHBIHSOP OF THE CHURCH OF UGANDA
Posted by Willy Akena at 11:33 AM No comments:

Rev David Given a send off


Rev David Onyach given a send off 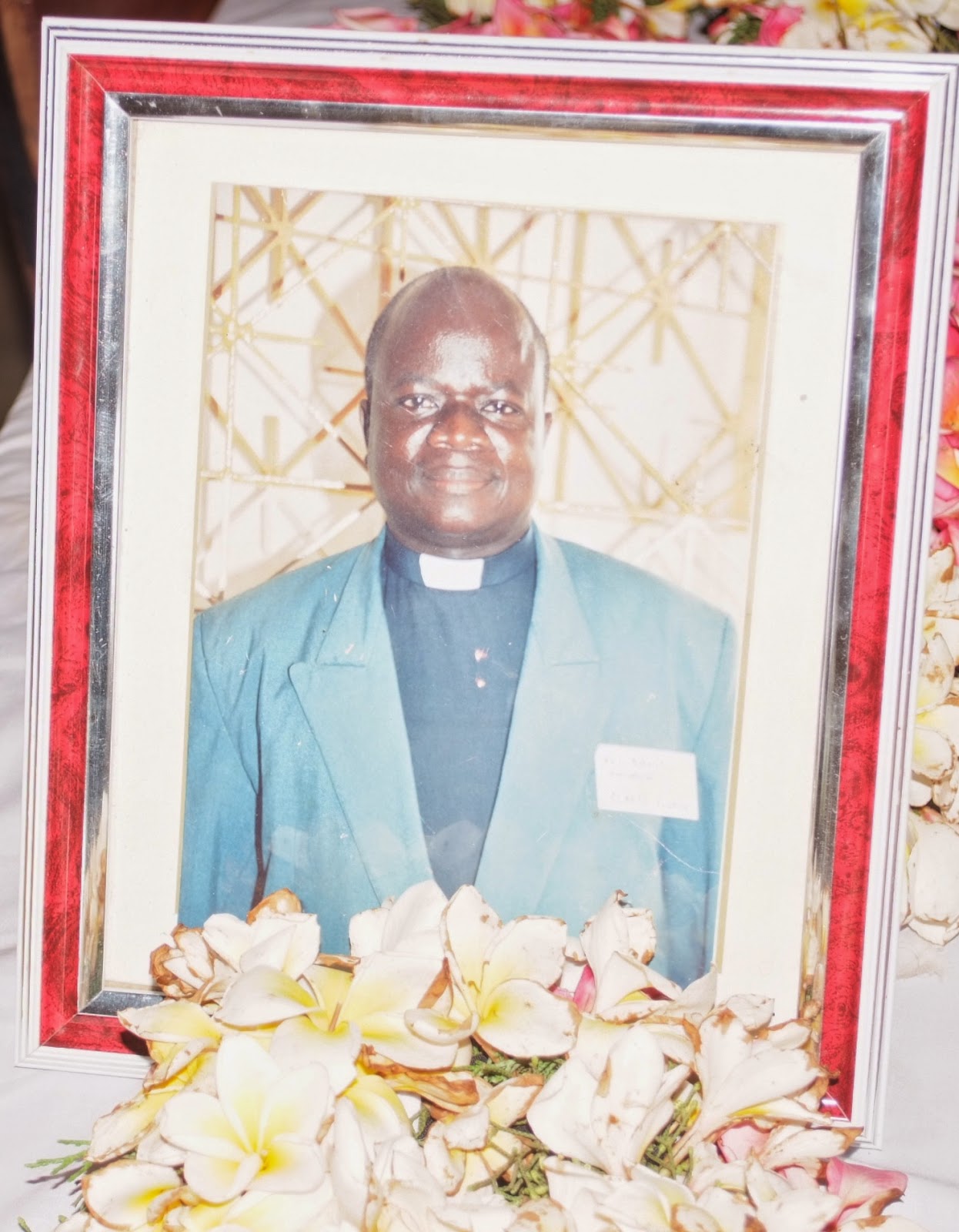 A one week of mourning  in the Diocese of Northern Uganda came to climax today Saturday 24 May 2014 as we laid the casket containing the remain of our beloved Rev. David  Onyach who served as the Diocesan Secretary Diocese of Northern Uganda for many years.
David also worked as head teacher in many schools; he was chairman board, chairman house of clergy, chairman Nwoya District Farmers Association, member of the Provincial Assembly and many others at the time of his Death he was Chairman Board of Governors Purongo Seed School and member of Nwoya Inspectorate of Schools.
The Bishop of the Diocese of Northern Uganda Johnson Gakumba described the later Rev. David Onyach as a discipline and hardworking priest who had a lot of respect for the Church. The Bishop told mourners to learn from the example of David and were he did not do well it is not us to judge but the matter is between God and David.
Rev David touched the lives of many people during his time of service.
The burial was attended by many dignitaries including Minister incharge of Political Mobilization in the office of the President Hon Richard Todwong who is the MP of the area, MP Lilly Adong, RDC of Nwoya, Amuru and Gulu, LC V, Commissioner Mr Uma Francis Agula, District Education Officers, Clergy, Mother Union the list is long.